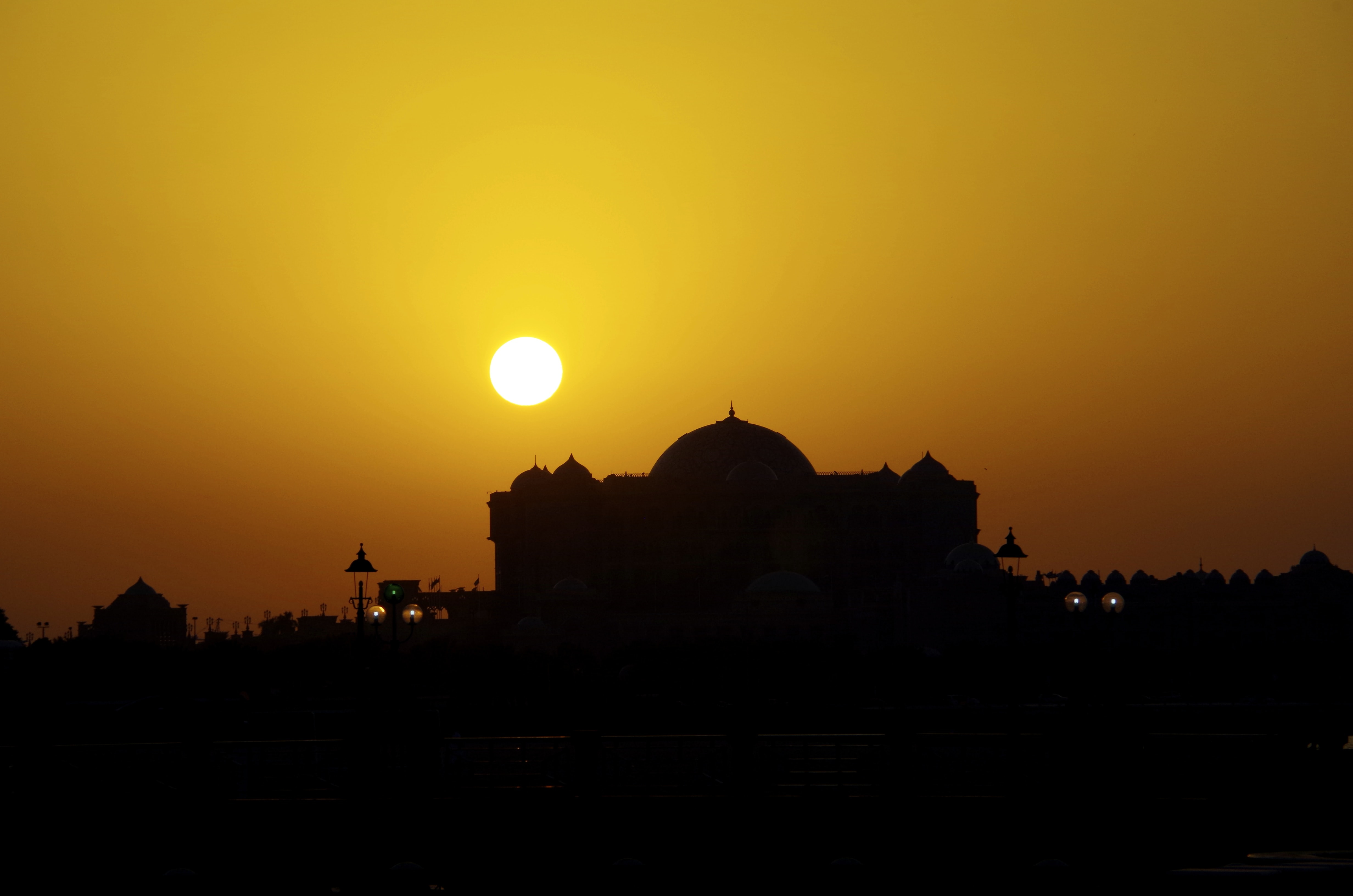 “Hilary!” I hissed, beckoning to my daughter. With a backward glance and impish smirk, my willful six-year-old took off across the carpets with me in hot pursuit, albeit at what I hoped was a more decorous pace.

It was mid-afternoon on an autumn day in Istanbul, and bright bars of sunlight played across the soft wool beneath my shoeless feet. With intricate designs of muted crimson, sapphire, and amber, each carpet was a work of art, but in that moment I was intent on apprehension, not admiration. Ignoring my stage-whispered entreaties, Hilary skipped from one alcove to the next along the perimeter of the Süleymaniye, the elegant imperial mosque starred as a Must-See in our Fodor’s guidebook. Although the vast expanse was largely empty, aside from a few fellow tourists, I was all too aware that we weren’t Muslim and fearful of giving even unintentional offense.

I caught up with Hilary only because she’d doubled back to eye the mihrab, the honeycomb-carved alcove indicating the direction of Mecca. I knew exactly what she was thinking: its small platform was the perfect stage for The Death of Hilary, a melodramatic tableau vivant inspired by Greco-Roman statuary and battle-scene paintings the girls had seen in the Louvre. Hilary and her sisters had gleefully performed it in every imposing architectural landmark we’d visited since commencing our expat stint in Switzerland three years earlier. Ordinarily, I found it amusing and felt cheered that, at least in that moment, all three girls were getting along. This space, however, was decidedly off-limits for their theatrics. I grabbed Hilary’s arm before she could shout at Emily and Carolyn to join her.

“This isn’t a playground. You need to be quiet and walk, not run,” I scolded, shaking her arm for emphasis. “You don’t run around at our church, do you? This is a church for the people here, and you need to be respectful.”

“It doesn’t look like a church,” she returned, flapping a dismissive hand at the cavernous space. “There’s no altar. Or candles. Churches always have candles.”

“It’s a different kind of church,” I said.

She glared at me, unconvinced. No doubt she felt cheated. She loved dropping an odd-looking foreign coin into a rattling metal box and lighting a votive candle in a wax-encrusted stand. It was the only time she was permitted so close to an open flame and, to Hilary, was the sole upside of traipsing through the dusty old cathedrals her parents insisted on visiting.

Admittedly, she had a point. The Süleymaniye looked nothing like any church she’d ever seen. And who was I, a cradle Catholic nervously adjusting a newly purchased headscarf, to deliver a two-minute commentary on the tenets of Islam to a fidgety kindergartner?

To be sure, I was projecting my own ill-concealed insecurity. I had never felt so out-of-place — so obviously, even intrusively foreign while traveling. Istanbul was nothing like Bern, our temporary hometown, where I looked so much like a local I’d been asked for directions the day after we’d arrived. Old Istanbul, in contrast, was an exotic sprawl of slender minarets, serpentine alleys, and manicured courtyards glimpsed only when rust-streaked metal gates parted just long enough to admit pedestrians or cars. Bern was a placid gray pigeon compared to this colorful, braying peacock of a city. I was immersed in a culture for which I had no reference point. Captivated as I was, I felt off-balance and uneasy, as if one wayward step or impulsive gesture would lead to distressing repercussions. Whenever we traveled, I took extra care with manners, both my own and the girls’. Here, I’d dialed up my Good Manners Meter to the max. Under no circumstances did I want any of us to be perceived as the proverbial Ugly American.

But this was 1996, well before terms like 9/11, radicalized, and jihad entered common stateside discourse. And, though safe to assume anti-American sentiment was simmering overseas, we’d met with nothing but friendliness in our travels. Scrupulous manners-minding had paid off, especially on our two-week trek around Turkey. Shopkeepers and waiters, street vendors and museum docents — all graced us with warm smiles and, in Hilary’s case, pats on her straw-blond head and occasional kisses on her cheek. Never lacking in self-esteem, she took this all in stride. “Everyone likes me because I’m so cute,” she’d say, especially when given a piece of candy or handmade trinket as her envious sisters looked on.

“They don’t have to live with her,” was fifteen-year-old Carolyn’s muttered rejoinder.

Now, taking Hilary firmly in hand, I led her away from the mihrab. Truth be told, I would have liked to linger and admire the blue and white Iznik tiles around the niche. I’m an unabashed handicrafts junkie with a particular weakness for hand-painted ceramics. The lavishly decorated blue and white Ottoman tiles framing the mihrab were nothing short of magnificent. But I wasn’t about to let Hilary attempt a solo performance of her self-styled demise in what I assumed was the most important, possibly sacred, area of the building.

“Let’s ask Dad to tell us more about this place,” I said. Ignoring Hilary’s complaint — “That stupid book is sooooo boring!” — we headed for my husband Adam, who was reading aloud from Fodor’s to our ever-patient eleven-year-old Emily. Carolyn, predictably, had wandered away. She circled the roped-off central space with neck craned, inspecting the enormous dome, ringed with arched windows and painted with flowers and Arabic calligraphy. Though the Süleymaniye bore no resemblance to a cathedral, it was, without question, a space designed to inspire awe.

As Adam related the sixteenth-century-building’s history, Hilary pulled away and stretched out on the carpet, arms folded beneath her head. She pursed her lips in an exaggerated pout and regarded the dome as if it were an extra-large serving of broccoli. Undeniably, it was the most comfortable vantage point from which to view the mosque’s most spectacular feature — my neck muscles complained after less than a minute’s inspection — but I was still determined to instill in Hilary a sense of propriety in a house of worship.

She refused to stand, despite my threat of a dessert-free dinner. Adam stopped reading and whispered, “Relax. She’s not bothering anybody. She’s just a kid.” Then he resumed his commentary about Süleyman “the Magnificent,” the sultan who’d commissioned the mosque, and Mimar Sinan, the architect who’d designed the complex which originally included a hospital, soup kitchen, bathhouse, and inn for pilgrim dervishes.

“What’s a dervish?” asked Hilary from the floor.

Adam read aloud the Fodor’s description of the Sufi ascetics. I drifted toward the Iznik tiles. When I looked back, Adam was craning his neck at the dome — and two small figures spun like tops in a far alcove. Emily and Hilary had apparently paid closer attention than usual to Adam’s guidebook commentary.

I stalked toward my giggling daughters, now dizzy as drunks, and announced it was time to go.

On the cloth spread outside the entrance, the pile of discarded shoes had quadrupled in size. Men and boys sat on small wooden benches performing the requisite ablutions prior to entering the mosque for afternoon prayer. Hands, feet, and heads, in turn, received a quick cleansing under gushing taps spaced the length of the mosque’s western wall. Hilary watched with keen interest, then begged to participate. I shook my head. “It’s only for people who are Muslim,” I said. “Anyway, we’re leaving. They have to do it before they go in.”

The courtyard hummed as locals, singly and in groups, arrived to deposit their shoes, wash, and make their way inside. Some placed crocheted white prayer caps on their heads as they entered. I was grateful to have gotten Hilary outside before she’d caused a disturbance. “Help me find our shoes before it gets too crowded,” I told her, kneeling to paw through the growing pile.

She quickly unearthed her pink Keds and proceeded to the steps. Hilary, who never walked if a more creative mode of ambulation occurred to her, opted for a variation on hopscotch for her descent. Hop down one step, then two, then back up one. Intent on her new game, she was impervious to those forced to detour around her. Hop, hop, hop, with a shoe in each hand, she was making the most of this novelty — outside in sock feet in October. What an adventure: cool marble beneath her foot, breath after huffing breath, each landing a thrilling test of balance. Step after step, she fully inhabited every inch of her sturdy six-year-old body. The most dedicated yogi — or dervish — could not have been more focused on the moment.

I called her name, but the sound was lost in the hubbub of the faithful, with more arriving by the minute. I was dimly aware of a tug on my sleeve. “Mom, look,” said Emily, pointing.

The courtyard crowd parted, and a small old man in a shapeless black suit emerged. Slowly, he climbed the stairs, leaning heavily on a knobby wooden cane. His leather-brown face, ringed with a thin white beard, was as wrinkled as an old apple. He wore a pristine star-patterned prayer cap on his bald head. His eyes, two shiny black beads, peered out beneath bushy eyebrows and fixed on Hilary.

She noticed him only when his sandaled feet reached the step just beneath her. When she looked up, his face was not so far above her own. Her mouth fell open. Without turning her head, her frightened eyes cut to mine. Rescue me!

Despite the crowd’s chatter, I heard a snicker. Carolyn, tying her sneakers beside me, was gloating. Her annoying little sister was about to get a long-overdue comeuppance.

Adam, searching for his shoes, didn’t look up, but it didn’t matter. None of us was close enough to pull Hilary away. Warmth crept up my neck, filled my face. It was all my fault. I should have gotten her out of there sooner.

The man leaned the cane against his legs and extended his hands, placing them on Hilary’s head. The crowd’s hum receded as he closed his eyes, bowed his head, and began to speak in low, rhythmic tones. Without knowing one word of Turkish or Arabic, I was certain his voice enveloped Hilary in the most unexpected and extraordinary blessing she — indeed, any of us — had ever witnessed or received.

How long did it last? Probably less than a minute, but just then it seemed as if time stood absolutely still.

Finished, he opened his eyes and smiled at her — a wide, toothless grin — gave her head a playful shake, gripped his cane, and continued up the stairs. Hilary stood motionless for a moment, then hurried toward us with a triumphant smile. Perhaps she sensed the comeuppance was mine. The old man might as well have been an angel, underscoring what she had demonstrated while I was foolishly preoccupied with false notions of propriety.

Joy, which knows no denomination, is the purest form of prayer.

Marian Szczepanski holds an MFA from Warren Wilson College and is author of the debut novel Playing St. Barbara (High Hill Press, 2013). She lives in Houston, Texas, and teaches creative writing workshops at Writespace Houston and beyond. During her family’s two-week trip to Turkey, she experienced a minor mishap on a country walk that resulted in an unplanned trip to an Istanbul hospital emergency room — but that’s another essay.