On Big Country, by Emily Varnell 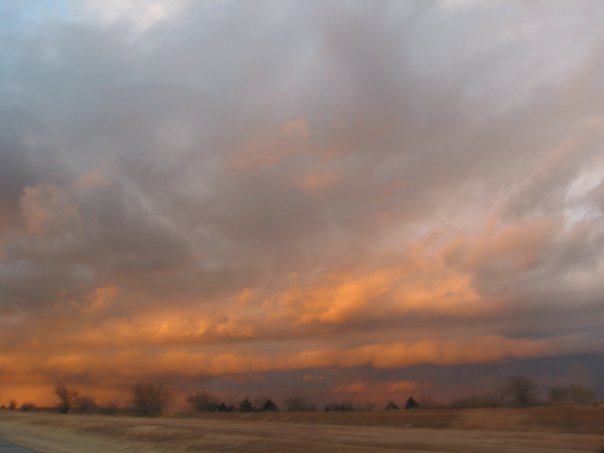 It is very easy to sit on the back patio by the stunted oak trees and cedars blooming with pollen, to see northern cardinals and chickadees and waxwings land on silver wire, to watch chickens jump into flower pots, and it is very easy to forget that I can still hear the drone of US Highway 290 behind me, that sirens of emergency vehicles are only 7 miles away on the other side of the valley, that I am not really in the country.

I can sit on this patio made of orange sandstone, the same color as the tile in my parents’ kitchen, and I can hear the cars in rush hour. But I can also hear the silence of an old neighborhood. Of old dogs waiting in dirt, of old deer resting in the shade of trees, of old fences rusting, of old mailboxes fading.

There are young deer too, of course, and young dogs and young children in the neighborhood. There are newer fences and remodeled homes, some newly built. But that is not what I remember when I turn left onto Trail Driver, when I see the subdivision sign that has been the same since the ’80s, with cacti and roadrunners drawn below the words BIG COUNTRY, the letters painted white each year by the neighborhood association. No one has retouched the roadrunners, though, that dart across the sign.

If you say the name of the neighborhood fast enough, it sounds like something good, something promising in its banality. When I was two, when I was three, it was one word—bigcountry, bicountry, becountry, bcountry—and it wasn’t until I learned to read that one word became two. It was a euphoric, funny moment. Like when you realize Newfoundland is “new found land” or U-Haul is “You haul” after passing a trailer emblazoned with a green dinosaur for the twentieth time. And then you find yourself watching the trailer until the road bends, until it bends down Trail Driver.

Now when I think of the name, the image it implies, I question it. But it is big country, someone says to me. It is big country, right now, because this place will one day be a suburb of Austin, where the welcome sign will read “Austin, Texas—Dripping Springs Division,” and only then will people visit the historic school house and the pioneer home and the old springs. Only then will people do more than stop at the Shell Station or run into the Walgreens, because there will soon be a shopping center, a movie theater, a hospital. That is what makes a town worth living in now, and that will be all there is. 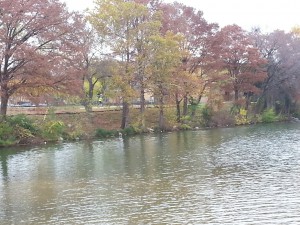 When my parents first left the Austin that is not Austin anymore—the Austin that had crack houses in Hyde Park and clean sidewalks on the Drag—they moved to a house with a steep driveway and no trees. I baked in the summer on that long driveway. Our closest neighbor had trees. They owned several lots behind their house that were covered in trees. A brown gate separated our two properties, our two long driveways. There was no lock on the gate, only a chain that fit into a notch at the top of it. There were two children who lived in that house with many trees; they were the same age as my little brother and me.

My brother and I had to be quiet when we went outside, or the two kids would take the chain off the notch and come into our backyard unannounced. I cannot remember what the girl looked like, but the boy had curly, sandy-colored hair. Their mom let them have Blow Pops at 10 in the morning, and I did not like them for that. But I put up with them, because their mother let us explore their property when they were gone for the weekend.

If you went to that property now, you would be unimpressed. It has only rock and grass that grows in raised clumps (the green part of that grass tastes like sugar), and the cedar trees greatly outnumber the oak. But if you walk back far enough, there is a creek bed that is only wet in flash floods and a limestone overhang 100 times smaller than the one at Hamilton Pool. It is a place only children can be excited to discover.

Once, when I was six, my brother and my father and I explored farther than we had before, farther than the dry creek bed and the limestone overhang. The oak trees thickened but did not make the sky any darker. We came upon a fence, and behind it was a white goat. It is a strange thing, finding a goat in the woods when it is white and clean. My brother and I took turns petting the goat and feeding it clumps of the grass that tastes like sugar. Beyond the fence the trees kept thickening, and I could see a giant oak tree not far from us.

Let’s climb it, I said to my father, let’s climb over the fence and go to that tree.

After many years, I forgot that day, the day we found a white goat in the woods. And during those years we moved to another house in the neighborhood, a house that was larger with more property and more trees and did not take us away from our school district. One summer, my father built us a fort in the back of the property of the new house, in the very, very back, by an oak tree near the fence line. There, my brother and I mashed acorns and made spears out of bamboo, flint rock, and twine. But eventually we let the acorns stay in the trees, and the spears fell apart without repair. I began using the fort to read in the afternoons, and my brother drifted inside to play videogames.

I went to the fort one afternoon and took our dogs with me. When I was ready to leave, when the sun had set too low to read without light, I couldn’t find the dogs. I called for them and set out along the fence line, afraid they had squeezed their small bodies through the wire squares and run off after a deer. But soon I found them.

They had discovered a fawn hanging from the fence, its hind foot caught on the barbed wire. Its head rested on the ground, its leg stretched too hard for too long. The white dots were fading, its hide taking on a leathery appearance. Organs gone, eyeballs gnawed out by a raccoon, a fox, a bird.

It was only then, in that corner of the fence, that I recognized it, the thickening of oak trees. It was only then that I remembered the goat. I realized I was now on the side the goat had been on, that I was now living in the backyard that had been so mysterious and beckoning to me, that I had climbed the giant oak tree that now stood as the base for our fort, that I had climbed to the top of it and seen the hills of the neighborhood, and the cleared meadows for horses and cattle, and the green of the trees that stretched for miles. 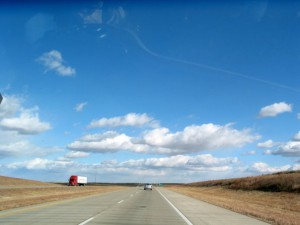 My dogs are dying now, the dogs that found the fawn on the fence. They cannot run anymore, and their legs quiver as they walk. Their small, mutt torsos are bloated with age, and one is almost blind. But like all good dogs, they know it’s me when I return.

On a recent trip home, a sign was standing by the entry to the subdivision. A sign held up by a tripod, the text black and red. It was calling for neighbors to attend the next town meeting about neighborhood zoning laws. A developer wants to build apartments here, for people who can’t afford the rent in Austin. The lot for the apartments is in the heart of the neighborhood, right by the creek that runs through it, where you can find tadpoles and wild dewberries (they taste like blackberries), where you can let your dog off his leash to swim in the summer, if there was rain in the spring and the heat of July hasn’t dried it up.

My parents decided to refinance their house a few months ago so they can take out home-improvement loans. Perhaps new kitchen countertops, a remodeled master bathroom. I think my father has been repainting this house for seven of the twelve years they have lived here. The scaffolding he uses still stands along one side of the house, so it is all you see when you drive in. The home value has sky-rocketed in the last twelve years, but if they sold it, they would be unable to afford another place anywhere near Austin.

My parents will be here until the end. Until all the lots are taken by apartment developers, until the creek has dried up for good, until all the oak is replaced with cedar, until there is no room for goat pens in any sense of the word.

But that is not what I want to think about when I come home to visit my dying dogs, and see my parents, and pass by my brother as he heads out the door with his high school friends. When I am done sitting on the back patio, I walk to the fence line and lean on it and remember the dead fawn. Its remnants, of course, are long gone. I could climb over the fence by myself now, go exploring on my own. But even if I wished to see that dry creek bed and limestone overhang, I cannot anymore, as the boy with the curly hair and his family no longer live in the house next to our old one, and three new houses now take up those empty lots.

I do not linger at the fence for long. I push myself from it and walk to the fort my father built. It stands on four posts that raise it high off the ground, and a footbridge made from an old ladder connects it to that giant oak tree. A ladder and a trap door let you in. It could be a proper house if the half walls were finished with the shutters we had wanted to include, and if there were four walls instead of three. I climb the rusting ladder and push the trap door open. There is nothing on the floor, just a bare wood that still smells slightly of the lumberyard at Home Depot. Dead leaves from the oak tree pile in corners, and I have to stop myself from kicking them, in case a spider or scorpion now calls it home.

I stand in the fort and look out through the half walls. I see oak trees and cedar trees. I have carried my dogs from the house, so I can hear them sniffing the ground down below. At this moment, in this place, I still see only trees and blue sky. The new houses built on those old empty lots are shrouded by woods, however thin the trees are now. And if it is not a weekday, if it is a Sunday, I do not hear the cars on 290 during rush hour, and I can hear the chickadees sing, and I can hear a donkey bray or a goat shriek from down the street. And it is still peaceful. 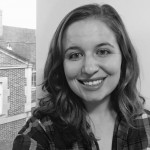 Emily Varnell is an undergraduate student at the University of Texas at Austin, studying English, Creative Writing, and Business Foundations. Her short fiction has appeared in The Blue Route. This is her first crack at creative nonfiction. She divides her time between her apartment in Austin and her childhood home near Dripping Springs, writing best after taking long walks through historic Hyde Park or sitting under oak trees.