In three failed essays about my dying dog, I used the phrase, “Fading into a milky blue.” This, of course, referred to his eyes. But when I tried to write about how leading a nearly-blind dog around shifts your role from a protected young woman in a rough part of town to the role of a caretaker—and all the sadness and guilt that goes with that—I got stuck, and not on the fault of my emotions, but on an image that was distracting me, taking the words “milky blue” and setting them down on the wooden table in the florescent-lit kitchen of my childhood home in Iowa: all I could see was the blue tint of skim milk inside a plastic jug.

I hated the way that the light shone right through it, how the cerulean hue of the milk matched the color of the lid that was twisted back on each time somebody refilled a glass. At the supermarket, I got into the habit of begging my mother to buy the milk with the red lid, the purple lid, even the green-lidded 1% gallon. She didn’t know why that’d started and (befittingly) told me to quit complaining. This is the milk we drink.

But I was old enough to be sleeping over at friends’ houses, or at least staying for dinner, and I felt that I’d uncovered some important knowledge that I hadn’t been in on before. Some people drank milk with fat in it, so rich and creamy that it tasted like I suddenly knew milk should taste. And some people ate home-cooked meals, like roasted chicken instead of chicken patties, mashed potatoes that didn’t come out of a box, vegetables that hadn’t been frozen, peaches that—all this time—were sugary enough on their own, without sitting in that sticky, canned syrup. I felt like I was being cheated.

Maybe I didn’t make the connection then, but the blue tint of that watery milk on our supper table represented something larger: life isn’t fair, whether it’s an issue as innocuous as milk or the impending loss of your best friend. Which is strange because, when I called my mother, and choked up hard while talking about the dog, that’s exactly what she said to me: it isn’t fair.

Sure, you wish that his eyes could go back to that shiny, deep black that watched your every move with such beautiful intensity and that his back legs wouldn’t shake then crumble every time he tried to stand. But, she said, we just have to accept the situation we’re given. We put our sanity at risk to think anything more is owed to us.

After saying ‘goodbye,’ I hung up the phone and pried myself off the couch, used all my strength to squat down and pick up my dog’s bony body, and carried him out to the empty lot behind my apartment so he could experience the fresh air. He blinked but didn’t move as I laid him gently upon the dirt, and then lowered myself down next to him. While lying there, clutching his yellowed fur, I gazed at the chainlink fences and bits of glass and cracked cement and tried not to imagine grass—tried not to imagine flowers. 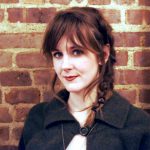 PAIGE TOWERS is a creative and freelance writer who earned her BA from the University of Iowa and her MFA in Creative Nonfiction from Emerson College. She currently lives in the diverse Riverwest neighborhood of Milwaukee and is at work on a book of essays about sound. Her writing has appeared in The Harvard Review, The Baltimore Review, McSweeney’s, Midwestern Gothic, Prime Number, So to Speak, Rock & Sling, and many other publications. She is a new Senior Editor of TRUE, Proximity’s weekly online publication.