The winner of Proximity’s 2018 Personal Essay Prize is:

“Already We Are Less Than Ever Before”

“What I most love about nonfiction is when it is written with the ability to surprise and shake free of the constraints piled on to it. This essay stakes itself in the lyrical, all the way throughout (“Synthetic organs would make death a relic”). I appreciate the essay’s compact nature, which makes all of its movements worthwhile, memorable, and echoing.”

First: “The Secret to Everything,” by Robert Wallace
Second: “Viral Sensitivity,” by Annabel Lang
Third: “The Diagnosis,” by Jude Hopkins 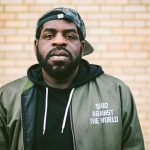 HANIF ABDURRAQIB is Proximity‘s 2018 Personal Essay Prize Judge. He is a poet, essayist, and cultural critic from Columbus, Ohio. His writing has been published in The The New Yorker, The New York Times, and PEN American, among other journals. His first collection of essays, They Can’t Kill Us Until They Kill Us (Two Dollar Radio) was named a book of the year by Buzzfeed, Esquire, NPR, Oprah Magazine, Paste, CBC, The Los Angeles Review, Pitchfork, and The Chicago Tribune, among others. He has two books forthcoming: Go Ahead In The Rain, a biography of A Tribe Called Quest (University of Texas Press) and They Don’t Dance No’ Mo’ (Random House).