Batboy is Disappointed, by Penny Guisinger

I assemble the Batman costume. He wants black gloves and can only find one. He can’t find the Dark Knight’s utility belt either—anywhere. I tell him that I’ll look for the glove, but sometimes things get lost. I want to tell him that we lose years, too, under the furniture and in pockets of the coats we outgrow. I’m shining a flashlight under the couch when he says, “Why don’t you keep track of these things?” I can’t find the belt. Or the glove. I give him my own black gloves. He scowls at the furry green stripe on each wrist. He doesn’t know how quickly this moment will slip under the furniture too, disappear like a sock in the dryer. “Batman doesn’t wear green,” he says. His mouth becomes a hyphen underneath bat ears and mask, and a silky cape billows behind him as he darkly menaces up stairs covered in beige carpet. I move the couch, looking for the years, trying to keep track. 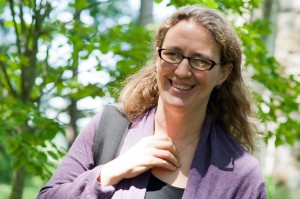 PENNY GUISINGER lives and writes on the easternmost tip of the United States. Her work has appeared or is forthcoming in Fourth Genre, River Teeth, Solstice Literary Magazine, Under the Gum Tree, and others. Her work is also forthcoming in two anthologies, due out in 2015. She is the founding organizer of Iota: The Conference of Short Prose. She is a Libra (sun sign in Aries) and an ENFP.