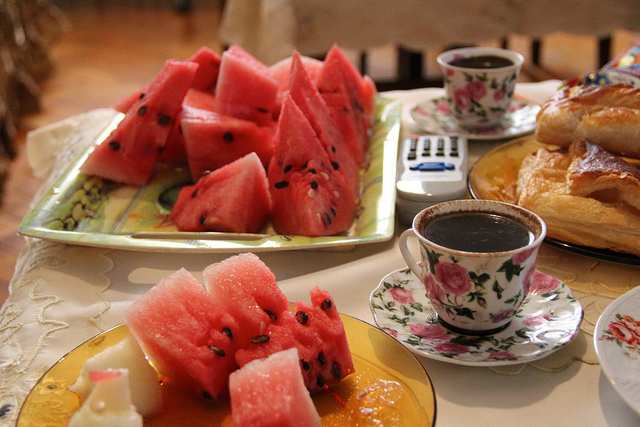 She was gone for four days.
Father knew she’d come back
to feed his boys. Every morning

he cracked some eggs and squeezed
blood oranges. We didn’t clean
the table because we kept waiting.

He drove to work, and we walked
to school at opposite directions.
We held hands to cross streets

but refused to discuss the fight
even though Dad finally hit her.
We fried more eggs for dinner.

On the fifth day, when we got home,
she had cleaned the dishes, wiped
the table, and the kitchen was full

of steam from the pressure cooker.

The Last Cup with Noyemzar

Mother sits three pews back from the altar.
The sight of the silver casket on the pallbearer’s
carriage dishevels her. She imagines the coffin

being her coffee table. The thermos feels warm
next to her lap. She searches for the courage to pull
two empty choir chairs, plop some pillows

underneath Aunt Noyemzar’s head, and ask
the priest to stop singing falsetto. The dead deserve
the best coffee and coiffeurs. Timidly, she mimes

the act of twisting the cap and pouring.
She cups her palm as if she’s holding a ball
of snow or a saucer for the imaginary demitasse.

They sat at the porch and stared at the street
for two days. No one talked. They had the patio
table and a bowl of roasted watermelon seeds

between them. From my bedroom window,
I could distinguish Grandma’s false set of teeth
and Mama’s back molars when they cracked seeds.

One sounded angry and the other grieved
over a dead husband. Mama offered Armenian
coffee without being asked because she knew

the salt intake made Grandma’s lips pucker.
They sipped the bitter residue silently and hoped
someone would predict their future hidden

in the curvature stains of the porcelain walls.

The Protocol of Politeness

When I brought the other home,
Mother invited her into the dining room.

I told her the other was Jamaican,
and Armenian coffee might be too strong.

Mother touched the other’s hand
and inquired in broken English:

“You like sugar-coffee?” I removed
unopened bills from the dining table.

The faucet rattled as Mother filled the pot.
Our fingers trembled. “May I watch

you make coffee? I like to learn,”
I overheard. They both said plenty

of “Thank you” and “Please.”
When she was leaving, the other

hugged Mother. As expected, Mother
in mid-embrace spoke in Armenian,

“Don’t bring her over again.”

The television bleats like a kumquat sheep.
The Ojibwa postman knocks on the door

when she washes the feet of the dining table.
Lucullus must be her lover; she sees him

sitting in the coffee residue. We don’t let her
kiss the demitasse. In the backyard,

the apricot tree hangs her Komitas;
her chemise hangs from the terracotta chimney;

she hangs Armenian poems on the clothesline.
When the telephone doesn’t ring, she speaks to it:

The cat likes to sleep in the refrigerator.
She calls all her sons, Rostom, and offers

the cleaning lady lozenge because she coughs
like someone’s daughter. 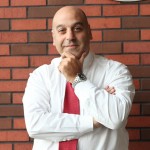 Shahe Mankerian’s recent manuscript, History of Forgetfulness, has been a finalist at four prestigious competitions: the 2013 Crab Orchard Series in Poetry Open Competition, the 2013 Bibby First Book Competition, the Quercus Review Press, Fall Poetry Book Award, 2013, and the 2014 White Pine Press Poetry Prize. Shahé serves as the principal of St. Gregory Hovsepian School in Pasadena and the co-director of the Los Angeles Writing Project. As an educator, he has been honored with the Los Angeles Music Center’s BRAVO Award, which recognizes teachers for innovation and excellence in arts education.