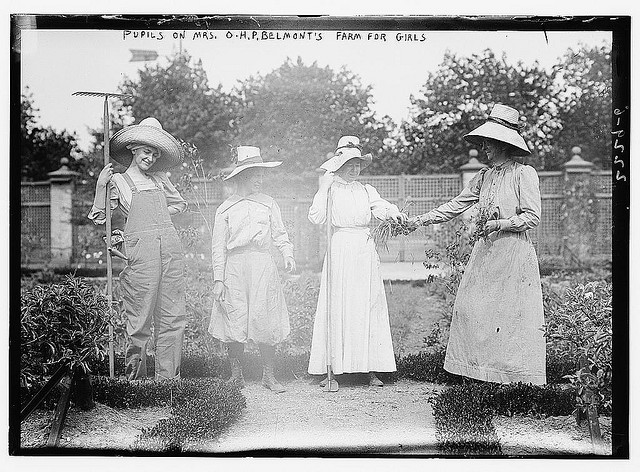 When my mother died in 1942, my father and my two sisters, Mary and Helen, and I were left alone in a big old house in upstate New York. I was nineteen. My sisters, who were both older than I was, decided to start a Victory Farm in the fields surrounding our home. They had the idea to do so from the knowledge that the “Farmarettes” had lived in our farm house during World War I. In 1917, the Women’s Land Army had taken what was then called the Woodcock Farm, built before the American Revolution, and housed 169 women to work on the Victory Farm. My family moved into the same house after World War I.

To help with the war effort for World War II, Mary and Helen organized volunteers to work the farm. Our job was to hoe the rows of each field and to weed. Food was rationed during the war, and some of the vegetables found their way to our dinner table. We didn’t have any meat during the war, and I remember preparing and serving a peanut loaf for the group, which I had learned how to make at the YWCA. Unfortunately, it wasn’t very good.  Growing the vegetables helped free up men to serve in the armed forces, and it gave women a sense of purpose during the war.

My sister Helen was a landscape architect and had great love and knowledge of plants. My other sister, Mary, was an artist and loved working outdoors. For the Victory Farm, they planted many vegetables, but the ones I remember best are the tomatoes, which gave off a lovely aroma when we picked them, and the fields of corn, where I would go to write letters to my boyfriend John, who was in the Royal Navy’s Fleet Air Arm, part of the British Royal Navy Air Force.

The Victory Farm covered about 50 acres. Every field had different crops. We grew fields of potatoes, green string beans, onions, lettuce, and many other vegetables.

My sisters ran the farm machinery through the many different fields surrounding the house, and once a week they delivered produce to the Victory Farm Center Receiving Depot. The nearest railroad station was at Bedford Hills;  the food, we hoped, was sent by train to the nearest Army base.

Seven British girls and I harvested the crops. Each morning, the English girls arrived in a car driven by their hostess, Miss Helen Frick, who had red hair and was a very old lady. We worked from seven-thirty in the morning until five in the afternoon. At noon, we had a simple picnic lunch, brought in paper bags. Often, I made cucumber sandwiches for my sisters and me, or tomatoes and lettuce, which we grew on the farm.

Our table there was a checkered tablecloth stretched out in the grass under the large sheltering trees that were on the edge of the fields. On very warm days we would be relieved from the heat by a gentle breeze rustling the leaves in the trees, bringing all the lovely feelings of summer. As we sat and ate our lunch at the outdoor table, we talked of the news of the war and also where our men in the service were.

The British girls had come to live at a home in Bedford to escape the bombing in England. A friend from Norway named Gunnar was also there, often wearing white pants embroidered with a big orange carrot. But I was closest to a girl named Hilary, who wore over-the-shoulder blue jeans and created watercolor paintings of the grounds. Sometimes, when we were supposed to be working, Hilary and I hid in the rows of corn to write letters to our boyfriends. The conversations we had around our Victory Farm table helped build a life long friendship.

Hilary, a refugee from France, and I first met in 1943 in the Red Cross in New York. We were trained to be “Grey Ladies,” nurses aides who, on graduation, were assigned to hospitals in New York City. Hilary loved babies, and her assignment took her to the Children’s Hospital in New York. She and her mother ‘Bubby,’ her uncle ‘Boy’ and her grandmother  ‘Bramie’ lived in a hotel there, where they rented an apartment. Hilary kindly invited me to dinner many times to join their friends from Europe at their table. She had gone to the same school my mother went to in Paris, The Convent of the Sacred Heart, before escaping from France through Portugal. In addition to her hospital work, she came to Bedford in her spare time and worked on the Victory Garden with me.

The Victory Garden continued through 1944, at which point my father rented an apartment and my sisters and I moved to New York City where we lived with him. In the winter of 1944, Hilary returned to England with her family, and In 1950, I went to visit her at the Royal Air Force base in England. Rationing had stopped in the United States, but in England they were still rationed. True to form, Hilary generously served me a fried egg – a precious food in England and rationed at that time.

Throughout the years, from 1943 to 2012, Hilary and I communicated through the mail. Every Christmas, she would send me a picture of her beloved family, her eight children and her 25 grandchildren. I did the same, having married my childhood sweetheart, Sam, in 1946, and given the blessing of three daughters, Georgia, Virginia, and Jody.

I traveled as often as I could to England, and when there Hilary and I shared more tables, and, as it happened, more memories. Even though we were many years and three thousand miles removed from the checkerboard tablecloth in the field under the elms at Bedford, our work – and play – on the farm cemented a lifelong friendship. 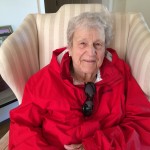 Fefa Whitman Myer grew up in Bedford, New York and now  lives in Madison, Wisconsin.  Born in New York City on July 17, 1923, she has wanted to write all of her life.  “Victory Garden” is her first published piece. Myer attended the American Academy of Dramatic Arts in New York City in 1941 and joined the United States Marine Corps Women’s Reserve in 1945, until she was married to Samuel Clarendon Myer in 1946. She and her husband and three daughters lived in Princeton, New Jersey, San Francisco, and Ventura, California, and the island of Bermuda.