Upper West Side, by Nico Cassanetti

There’s a lake in Central Park filled with ashes. Quietly deposited and floating on the surface before they disappear. We were supposed to go together, but at 7 a.m. he called me and said, “I did it.” He went to Hernshead right after sunrise. The only ones there were morning joggers and a few sanitation workers poking at last night’s trash with their pickers, skewering coke cans and brown paper bags as though they were spear fishing. He had navigated the worn path towards the promontory that jutted out into the lake. His tall frame was punctuated by the white grey tips of his hair, unfurled from lack of sleep or lack of hair gel or lack of caring because this was the morning he would scale the hulking bedrock in silence, and scatter his only brother’s ashes into the lake. There’s a lake in Central Park filled with tears. Those we leave there to swirl amongst the rocks beneath the boats. A reflection of a body that we see sometimes in dreams, from which we wake too soon. There had been much talk of what to do with the remains. Urns were brought up briefly, but it was Rose who said the lake. We were all supposed to go, but he went alone, and we understood. We had been there for the hospital beds, the IV drips, the ham sandwiches we dutifully delivered every evening. It was only fair we let him have Hernshead. “Some got on my pants from the wind,” he said. I could hear something in his voice. A laugh or tear or something else. “I waited ‘til it sank, ‘til he disappeared.” There’s a lake in Central Park filled with stories. Stories we carry with us, and stories we leave behind like rocks on a headstone. It had been three days since I felt the weight of my father’s arm around my shoulder as I led him up West 86th street towards Central Park West. He was wearing one of John’s coats, pulled from the closet before we had left, and as I hid my face in the sleeve, the smell of John mixed with his, and I was six again. It was Christmas, and I circled the sea of torn paper on the living room floor dispersing hugs of gratitude for my gifts: ThankYouMomThankYouDad. ThankYouUncleJohn. “You told me not to come. You told me he was fine.” His hot breath broke through the coldness of a New York March as he spoke, and I was twenty-nine again. This was the night I broke his heart. There’s a lake in Central Park filled with regrets. Of the times we should have been there and the things we should have said. To know a person is to empty the home they left one day without knowing they would never return. It’s enough stuff to fill a lake or a twenty-two-foot box truck lumbering down I-95 South with the city slowly shrinking in the rear-view mirror. Letters were tucked away in desk drawers, careful inscriptions were discovered inside book covers, and a windowsill was lined in photographs, some so old the images stuck to the glass when you tried to remove them. These things we hold on to forever. But the forever things are only half of who we are. There are manuals for computers we no longer own, blank journals we never wrote in, books and movies we loved enough to buy. Dried out pens and spotted wine glasses, spices we only used that one time we tried to cook Indian food. Most kitchens will have rice or pasta or other things we never let ourselves run out of, but then we find ourselves in the dry goods aisle at Gristides thinking, Am I out of long-grained Jasmine rice? AAADDC batteries (never double A), a toolbox with no nails, or bottles of strange liquor no one really wants to drink but you keep anyway. This shampoo and that lotion, and all the colognes that linger on our coat sleeves that hang lifeless in a hallway closet. When I die, you could just as easily find my toothbrush in the shower caddy as you could with its head hanging off the edge of the sink. I still don’t know what that means. There’s a lake in Central Park, filled. 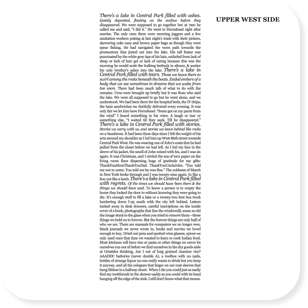 “Upper West Side” is an excerpt from These Things Happen Every Day–a series of “concrete-style” short works that are confined to the shapes of the neighborhoods in which each piece takes place. I wanted to find a way to convey this incredible notion that in New York City, at any given moment, there are hundreds of stories happening simultaneously—most of which we will never get to hear or experience. These are some of the first pieces I wrote after I left New York, a place I know changed me as a writer, and as a person.

Perhaps, in a way, this is my ode to New York City—like a postcard, sent to an old friend, saying how much I miss them. 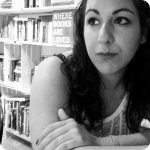 NICO CASSANETTI graduated from The New School with a BA in creative writing, and is currently pursuing her MFA at Florida Atlantic University in the same. Her writing has appeared in Life|Style Magazine, The Faster Times, and A3 Review. Her favorite punctuation mark is the em dash. Nico lives and works in South Florida, but asks that you do not judge her by this unfortunate circumstance. (@Nico_Wins)