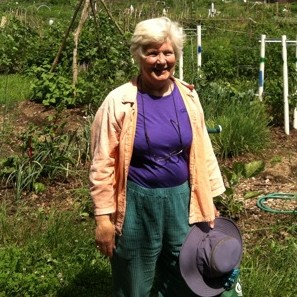 Based in her home-state of Tennessee, Robin Chapman’s poems “Oak Ridge” & “Early Days” (Issue 1) present morning in its most unsullied form: at home, in nature, as a childhood remembrance. In the following interview, Chapman discusses mythic plots, her workspace, and the secrets of her childhood.

Robin Chapman grew up in Oak Ridge, Tennessee, the hometown of these poems, and now lives, gardens, paints, and writes in Madison, Wisconsin. She is author of nine books of poetry, most recently Dappled Things (Paris: Revue K), a collaboration pairing 23 of her poems and Peter Miller’s photogravures, and One Hundred White Pelicans (Tebot Bach), poems of climate change. Retired from teaching at University of Wisconsin-Madison, she helps organize the UW-Madison Chaos and Complex Systems Seminar.

What inspired you to create this piece? I had been reading Jim Harrison’s poems, and their vivid evocation of early mornings walking with his dog reminded me of my own early childhood, which seemed filled with exploration of the wild places and lush gardens of the neighborhood, accompanied by the neighborhood animals and friends—full of secrets and discoveries—and, looking back, the town of Oak Ridge itself a secret, and all the murmured secrets among the adults, and the work of scientists, for good and ill—so those poems have lead me into a whole book of poems, Six True Things, that will be out from Tebot Bach this winter.

How would you characterize your creative process as you worked on this piece? (ex: fast and furious, slow brew, fits and starts) Fast and intense and focused: once access to sensory memory comes, the poems arrive!

What writing or other artistic expression has had a profound impact on your writing? Why? I was a reader very young—all the Oz books and fairy tales (mythic plots!), and Heidi, Understood Betsy, Rebecca of Sunnybrook Farm I reread many times. Looking back at them recently, I saw the heroines were all orphans, dealing with loss by becoming resourceful, and poets; and, quite amazingly, the books were written at the end of the nineteenth or beginning of the twentieth century with elaborate and complex syntax and capacious vocabulary—a gift to the beginning writer!

Where do you create? Tell us about your workspace. My desk is a perpetual mess of papers, books, articles, external reflection of all the intentions for poems and writing and tasks pending; and every day I resolve to clean it up, but take up my notebook for writing instead. In winter, I’ve gone to an artist’s residency in the Leighton Studios on the campus of the Banff Centre for the Arts for a month—there, the table is empty, the windows open to the Canadian Rockies, woods, weathers of snow and forty below, and passing mule deer and coyotes, and I write and write whatever comes.

Who has been influential in your writing/creative work? Why? My two writers’ groups of twenty five years each have been companions on the path, insightful first readers, thoughtful responders, accomplished examples, and reasons to write weekly: one, a group of gifted women poets; the other, wise writers in multiple genres and both men and women.

Why do you think you’re drawn to “mythic plots,” as you described the Oz books and others? Why the “mythic plots”? one way of answering might be, Aren’t they all?! Or to say I needed to find stories that spoke to me about finding my way through life, and the stories I read had the virtue of having protagonists , many young girls I could identify with–who were also full of curiosity and independence and resourcefulness (think Nancy Drew; and there was also Sherlock Holmes!)

Why do you think you’re drawn to writing about the “secrets” of your childhood?How did these secrets influence you?as to the “secrets” in my life–the (private) lives of the grown-ups around me–they were mysteries felt, but not understood: that we were the only children in school without a father (divorce in the family felt shameful back then–hard to imagine now!)–that–even further back, there was our Cherokee ancestry not talked about–I suppose I’ve always worked, in both my poet’s and scientist’s life, to bring language to what was difficult to say, or unsaid.

We asked Robin to dip into the “Proust Questionnaire” and select a few fun (less writing-related) questions to answer. This probing set of questions originated as a 19th-century parlor game popularized by contemporaries of Marcel Proust, the French essayist and novelist, who believed that an individual’s answers reveal his or her true nature.

When and where were you happiest? Two vivid memories from widely separated times: childhood among the iris gardens and honeysuckle bushes in Oak Ridge, Tennessee; finding my new love, Will, canoeing and portaging in the Boundary Waters fifty-five years later.

Which words or phrases do you most overuse? Wonderful, terrific, fantastic, great! (also exclamation points; and semicolons).

What is your greatest extravagance? At least two: buying poetry books and having my paintings framed.

Which talent would you most like to have? Being able to speak (and think in, and write well) a second, third, fourth language.

Who is your hero of fiction? From childhood: Heidi, and Lassie, Dorothy and Glenda the Good and Princess Ozma of Oz; Wonder Woman and Nancy Drew. From Swiss Family Robinson, the family. Jo in Little Women. Miss Marple and Peter Whimsey from detective fiction. Idealizations, of course, and perhaps why it’s hard to think of an admirable “hero” figure among the adult classics of literature.