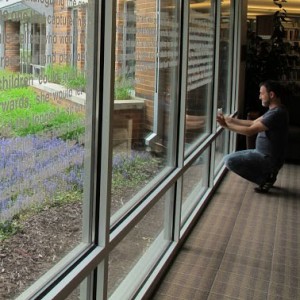 In “Two Minutes” (Issue 4), Kevin Haworth navigates Tel Aviv and the Gaza conflict, summer 2014, through technology and family. This is a story of survival, love, and bomb shelters. In the following interview, Haworth discusses his children, his impromptu workspace for his piece, and teaches us a little Hebrew.

Kevin Haworth is the author of an essay collection, Famous Drownings in Literary History, and a novel, The Discontinuity of Small Things. He teaches at Ohio University and at Tel Aviv University and writes regularly about Israel, the West Bank, and Gaza for Michigan Quarterly Review. If you’re in north Tel Aviv, he recommends Benedict’s for brunch, Basel Congress for a late-afternoon snack, and Café Jeremiah any time of the day.

What inspired you to create this piece? I was approached by one of the editors, Maggie Messitt, who knew that I had spent time in Tel Aviv during the most recent Israel-Gaza conflict and encouraged me to construct a flash essay around the experience.

Where do you create? Tell us about your workspace. I wrote the first draft of most of this piece while walking to work and then typing awkwardly into my phone while standing under a stop sign. So I guess, in this instance, my workspace was a sidewalk, Grosvenor Street, Athens, Ohio.

What living writer would you recommend other nonfiction writers read? What titles in particular? Why? Maggie Nelson (Bluets) and Eliot Weinberger (An Elemental Thing). Each of these books has stretched my understanding of what nonfiction can accomplish. Plus, my students love them.

Is there anything else you’d like to share with us about this piece, in particular, or about your creative process, in general? I would like readers of the piece to know that a) my children are totally okay; and b) my 11-year-old son has a lot to say about the Israeli-Gaza conflict if you are interested.

I’m curious to hear about the Israel-Gaza Conflict from the standpoint of an 11-year-old. Could you explain his viewpoints? With my son, it’s not so much what he has to say as it is the words that he has to say them with. He knows Tel Aviv and Jerusalem. He knows Gaza and the West Bank, and knows that they are separate places. He knows the word Israeli and the word Palestinian, and understands that these intersect with the words Jew, Muslim, Hebrew, Arabic, but not always and not interchangeably. He knows that Hamas is a word you need to know when you live in Israel, just like you to need to know the words for water, milk, bomb shelter. When we have words for things, we can discuss them with empathy and nuance. Only then.

We asked Kevin to dip into the “Proust Questionnaire” and select a few fun (less writing-related) questions to answer. This probing set of questions originated as a 19th-century parlor game popularized by contemporaries of Marcel Proust, the French essayist and novelist, who believed that an individual’s answers reveal his or her true nature.

If you were to die and come back as a person or a thing, what would it be? My daughter’s stuffed bear. Alternately, my son’s cello.

Which words or phrases do you most overuse? Interesting (English); Yofi! (Hebrew)

[Proximity interrupts to ask] Could you explain the meaning of “Yofi!” to those not fluent in Hebrew? Yofi! Is an ultra-common word in street Hebrew. It’s derived from the word yafe (pronounced ya-FEH), which means pretty, but bends to what moment and context demand. A very beautiful woman causes us to pause and extend the word: she is ya-feh-feh. A moment of pleasure gives us yofi! When you want to express deep appreciation, you combine that word with another and say, Eh-zeh yofi. Such as when my daughter shows me a drawing and asks, Abba, what do you think? To that, we always answer: Eh-zeh yofi.

What is your greatest extravagance? I buy new issues of Saga (Brian K. Vaughn, writer, Fiona Staples, illustrator) the second they are released.

Which talent would you most like to have? Flying

What is your current state of mind? New York