A Letter from the Editor

If you love literature, then maybe you already consider reading a good story to be the ultimate escape. Stories give us alternate realities to embrace, and the act of getting immersed in a book or essay or film or series of photographs can serve as a physical escape, too. Luckily, those chores somehow seem easier to accomplish with the mental renewal that follows.

In this, our fifth issue of Proximity, we present nine very different true stories of escape—some are lighthearted, some frightening. In these stories, escapes happen in a single moment and as an ongoing process that may or may not yet be realized. But in all of them, escape results in either a real or anticipated release of profound physical, emotional, mental, and even spiritual impact.

In “Canvasback,” by Susan Fox Rogers, you’ll meet a woman whose passion for birding helps her brook a midlife crisis. And in “Mourning Palace Release,” Gwendolyn Edwards narrates a chilling moment full of palpable danger.

Remote locations offer obvious places for escapes, and in his photo essay “Iguaque,” photographer Charles Townsend Bessent takes us along with him as he journeys unexpectedly into a far-flung Colombian village. Similarly, filmmaker Keith Reimink invites us to experience layers of physical and mental escape as he narrates what it’s like to spend a winter at the South Pole in his short film, “On Being Polar.”

Cars and road trips figure prominently into the escape stories of Priya Hutner and Brendan O’Meara, the writers of “Sleeping Beauty’s Ashram Escape” and “The Sultans of Swing,” respectively.

In “Some Superstitions are Forever,” Russian-born Margarita Gokun Silver’s escape vehicle is an airplane that takes her away from her homeland and to the promise of a new life elsewhere.

Award-winning writer and poet Christopher Cokinos titled his poem “After the Water” as a reference to painter Rene Magritte’s early painting of the same name. His poem’s uplifting final moment beautifully captures the process of moving through crisis toward relief. And in “They’ll Try Again Tomorrow,” Brad Aaron Modlin makes use of surrealist elements and compact, poetic language to voice a collective outcry for escape.

Perhaps you’re sitting down right now to read this issue of Proximity, looking for a moment of reprieve from whatever else is going on. My hope is that the stories collected here will carry you beyond a momentary escape and into a more cathartic space, one in which you’re recharged and ready to take on whatever challenge you next meet.

Along with the other editors on Proximity’s editorial team, I’m proud to include these nine talented storytellers in Proximity #5: ESCAPE. We look forward to seeing your comments on our Facebook page. 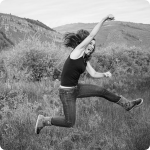