How Butterflies Got Their Colors, by Aaron Bell

With or without a bonfire, camp experiences invite us to lean in and tell stories—be they new or passed down. In this issue, we are pleased to share the work of Ojibway storyteller Aaron Bell.

Bell has performed with the Gonrah Desgohwah White Pine Dancers for years. Together they bring word, music, and dance to stages, orchestra halls, schools, festivals, and Canadian national exhibitions in Toronto and throughout Ontario. Through entertainment and education, they seek to share with audiences who want to learn more about First Nations culture. Storytelling, Bell has stated, is a way to instill values such as “respect, morals, and discipline—all the skills that you need to be successful in our [First Nations] society.” He says, “Every single one of our stories has teachings that are woven within the words.”

While creating within a tradition, Bell points out that he is not a “Traditional Storyteller” because his narratives are original and a Traditional Storyteller “knows and shares the stories of his or her people word for word in the oral tradition during ceremonies and recognized times throughout the year.” Bell hopes hopes his narratives, like older ones, help listeners of all ages learn. Stories, he says, “will teach you things and you won’t even know you’re being taught.”

Below, you can listen to Bell tell “How Butterflies Got Their Colors.” 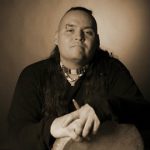 Author of the children’s book Jak’s Story, Ojibway Storyteller AARON BELL began his career in the visual arts at Sheridan College and Mohawk College in Canada. Through his work for organizations like the Cultural Centre and Kanata Native Traditional Village in Brantford, Ontario, he was led to acting, set design, and eventually First Nations storytelling. He and the White Pine Dancers have performed across Canada and produced two CDS, How the Oceans Become Salty andPainted Imagination.