As soon as we got out of the car, I was already complaining to you that the hay was in my shoes.

I was wearing my second-oldest pair of Converse lowtops. They’re black, and they look like hell: torn, stained, the inner soles worn through. I imagine those shoes were a little like us, threadbare and frayed at the edges, our private lives buffeted by the storm of Midwestern politics. So I was complaining about the hay, but I wasn’t really complaining. I was complaining in my way. In the way that I do. For pretend. And you laughed in your way. In the way you did when I complained like that. As if to say, Shutthefuckup.

The ground at the flea market was pillowy with that hay, so that when you stepped you sank a little. After a few strides you seemed to bounce along, more than your usual ecstatic step, the way you ignore your heels and walk on the balls of your feet. More than your normal way of bounding through the world, only touching down for brief moments among the havoc and fear that have taken root in our conservative town. The hay made the ground feel loamy and alive. It seemed to breathe under our feet, so unlike the hardness of the clay that is the ground in eastern Nebraska.

Most of what we saw at the flea market was other people’s junk, kiln-melted vodka bottles called “cheese plates” and wads of knotted yarn and thread called “art.”

But we saw some cool stuff, too: A ten-dollar chair upholstered in avocado brocade, with sharp lines and angles. A cheap, silver ring that I bought as soon as I saw it. Two beautiful bird prints in wormwood frames; you loved them, and they were still there the next day, when I went back with my parents to buy them for you. The woman running the booth remembered us from the day before and she asked about you, but I was only able to talk her down $10. (I would have gladly paid 20 more to buy them for you.)

There was a box of Nancy Drew books—The Crooked Banister, The Hidden Staircase, The Haunted Bridge. I wanted to buy them and I should have. They were my favorites as a kid. I told you I preferred Nancy Drew to the Hardy Boys. “In fact,” I told you, “as a child I saw a stage production of The Hidden Staircase in Minneapolis, and we went to the sculpture garden at the Walker Arts Center that same afternoon.”

The sculpture garden with the spoon.

The spoon with the cherry.

By sculptors Claes Oldenburg and Coosje van Bruggen, who were married for thirty-two years.

So cherries remind me of Nancy Drew.

And Nancy Drew reminds me of you.

I left that silver ring in the bag of your clothes when we broke up a month and a half later. You said, I just see the ring you didn’t need to give me that, via text message at 5:57 p.m. on Halloween, 2010. I had just driven away from your apartment, crying and ready to confess to anything because I hated to watch you stand there, sobbing, looking beaten up and deflated and small.

Earlier that evening, we sat for two long hours in your living room, the fading autumn light covering us in gilt. We could only vaguely see one another because we hadn’t bothered to turn on a lamp. We sat there, talking to imprecise shapes neither of us quite seemed to recognize. You were sitting on the sofa where we had lain so many times, watching movies, touching and smelling each other’s smells, and I was sitting on the armchair where neither of us, until that night, had ever sat. Behind your thick glasses your eyes looked red and puzzled. You looked like a child—vulnerable and soft and messy and ready to break.

This was not the way either of us had imagined spending Halloween. The week before, at the Omaha Zombie Walk, we had dressed as James Dean and Hunter S. Thompson and held hands, comfortably faceless in the middle of a bloody horde. But we had planned to spend Halloween apart: You would go dancing with your friends, and, because I’m not a dancer, I would spend a quieter evening with a smaller group of mine. But neither of those plans seemed relevant in the wake of the collapse of this relationship, our favorite constellation. 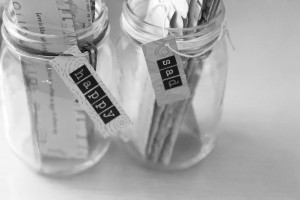 Instead we drifted, you back to your bed and me back to mine, returning to the apprehensions of ridicule and violence that I’d abandoned when we met.

The ring. It was a wide and incomplete band of impure silver, the kind that could be bent and pinched and adjusted for its wearer. First for me, then for you. We were told it was handmade in Tibet. It was clearly handmade—the soldered coils were unevenly placed, a frenetic pattern of intertwined fingers and limbs—but the Tibetan part was, I suspect, nonsense. It was a junk ring, but I loved it because it meant you. It turned my finger green and dry, so that even if I forgot to put it on, its outline was still there—a band on the finger reserved for the holy matrimony that could not have been performed on two boys who loved each other and laughed in your bed, naked.

On our way home from the flea market on that September afternoon, we listened to the Rent soundtrack—the first disc, because it has all the good songs. I’d just purchased it used that morning before the flea market, after we had walked from your place across the 10th Street bridge to the farmer’s market, where I’d bought more okra than anyone could need. We were told to leave our bags of produce at the front counter because the woman at Homer’s Music and Gifts thought we might try to hide CDs in our bundles of dandelion greens, red onions, and patchouli soaps handmade by an Argentinean hippie.

I mooed ecstatically out of your open car window all the way home from that flea market, through Omaha to your downtown apartment. You shook your head, a rare moment in which I did something odd enough to embarrass you. As cars pulled up alongside us, my mooing grew louder, approaching an ecstatic and fierce howl. I just had to get it out, that mooing, because sometimes it seemed to be the only thing separating us from the well-mannered veneer of this Midwestern city.

I felt at that flea market, as I often did, a strong and nearly irresistible desire to touch you, but two boys touching in the ways we touched would not have been tolerated in rural Nebraska. But sometimes I touched you anyway, when we were sufficiently alone or behind a pile of junk or shaded by a tree or mobile canopy. I could feel the war inside you—part of you recoiling in fear of what the conservative junk-mongers might do and part of you wanting to fight past that, nerves reaching out like the fronds of some carnivorous plant. Those nerve endings, those tendrils of our fingers, coiling and curving around one another, warm and wet for mere moments.

But moments are all we have. Love, as powerful as it will ever be, is not defined by the big events, the calamities and concerts (as wonderful as they were). Love is driving home in ear-ringing quietude after seeing some local band play live. Walking across the street to Joe Banana’s for oatmeal and coffee in the morning. Watching you dance through sprinklers on our way home from seeing Spoon and the Faint play at a fledgling music festival. Stopping to put oil in the car before driving to Lincoln for the day. Watching you walk down the street after dropping you off at work. Sitting in familiar silence in some restaurant, studying each other’s eyes, waiting for our food to arrive. The din of other diners, ravaged by hunger and anonymity, fading into the distance while we made up whole lives between us. The sadness of being alone in my bed, longing to be at home in yours, waging war on fear with laughter. 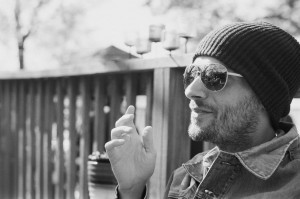 Living in Omaha, Nebraska, S.R. AICHINGER holds an MA in English from the University of Nebraska–Omaha, where he was a 2012 Presidential Graduate Fellow. He is continuing his graduate work in Creighton University’s MFA Creative Writing Program. His creative nonfiction writing focuses on ways of remembering as a mode of embodied composition. He is a contributing writer at Hear Nebraska, a nonprofit organization dedicated to Nebraska’s local music scene.