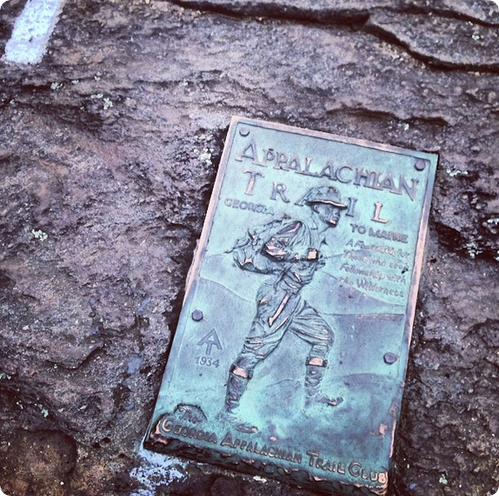 The following poems have been selected from Jonathan Travelstead’s unpublished collection Conflict Tours, and from a section in which the speaker explores austerity as he hikes the Appalachian Trail.

Weeks in the Chattahoochee and Nantahala Forest,
all you have is this shadowbox of mountains, balds, and gaps:

Hawk, and Springer. Gooch,
Tray, Cowrock, and Blue. Blood Mountain—
where you watched from the shelter as a black bear
solved your trucker’s hitch, snuffled your food across roots,
the stamped-down path, taking nothing.

Gaps, flat points where mountains meet
like pauses between ascending and descending notes:

Their naming is its own sweet music—
the scribbled crossings, summits, and roundabouts
of a wannabe musician who doesn’t know his instrument,
but hopes one day he will be lost in it,
able to take a bearing by the spoken sound
of landmark alone.

The legless camp chair made of nylon
which rolls up, snaps together, and weighs only twenty ounces.

Jokers removed, a deck of cards
with quarter-sized holes bored out of its center.

The plastic cross perforated with little grids
your sister crocheted in green- and salmon-colored yarn.

These are the things you don’t pack
for their poor calorie-to-weight ratios, for how
pleasure softens the body.

What you have: Two lines of James Kimbrell’s “Mount Pisgah,”
The Doxology inked on your left forearm.

For how it dehydrates the body but wets also your eyes,
makes them weep, fooling you into believing
you could deserve such comforts.

We do not name one another as the Cherokee or Sewanee tribes
who lived in these mountains did, verb conjoined with a quality of a tree’s
thick bough, a panther, or mythic, larger-than-life men who went before them.
Bones, a surly Northbounder, camps with us in the fire tower,

duct tapes our feet so they don’t pancake on twenty-mile days.
He charts by laser pointer in the star-shocked night where potential earths
occupy the Habitable Zone. And then there’s Chef John Wayne,
boonie hat pinned on one side, whom I meet swaggering the switchback

of an eastern-facing ridge like Johnny Depp’s case study. Howya doon?
His gritty, long-voweled greeting, and the pemmican he offers
from his bowie knife’s tip. Strangers all, we fit clothes over one another
from characters in familiar stories. Too sore to move. Sacked out

by the Nolichucky river. Captain Jack, a retired seaman, sixty-eight,
stops, auctions off two stories, a snort from his flask, and pancake mix
for the blessing of good company I doubt I provide. Good company.
Would you even recognize it if you sat beside your double on a plane?

Or, walking by your unkempt beard, fecund handsomeness in a supermarket
would you know him, or cut yourself off halfway through calling out,
embarrassed and ashamed, convinced that you saw only another stranger
in the white noise of strangers? If I could know how others think of me,

and then change it like a shoe with a blown sole, then Axl Rose and Ghandi
would be on speed dial, in that order. What a man asserts about himself
tends to blow a bit flat, or too lonesome. Too true. Nowhere Man,
Lone Wolf. That guy and his friend, the other guy. One, a professor

in microeconomics, the other an accountant. Both middle-aged, single,
they’ve taken names after abstraction’s desired effect. Each glances
in my firelit face after he says it, as if waiting for the moment
sadness arrives. Hiking, occupied wholly in my own unseen crisis

and insecurity, Big Country skirts a mountain, joins our pow-wow
with other hikers alongside the trail for lunch. Befitting his title, annexes
our leftovers into a fifty-five pound pack, kindness I am glad in giving.
Unwanted ramen. Tent stakes, though I don’t think he has a tent.

Maybe we do share kinship with the natives who lived here, assigning
allegory like tools which dismantle even good, strong fences
so the new neighbors can come over and have a big time. Turkeybear,
who claims a black cub is ahead on the trail, but we scout ahead

and only a red-wattle and black wings blitz us, gobbling in the underbrush.
Wasabi Pea, blonde, a tiny little number it’s easy to keep pace behind,
reaches into a baggie every twenty steps or so. How many more
names like the credits scrolling after a film before the web of characters,

our familial relationship, is clearly visible? Nip Slip, Floats, and Clean Cut.
Bike Cop, C-Biscuit, and Ain’t Got One. Toots. 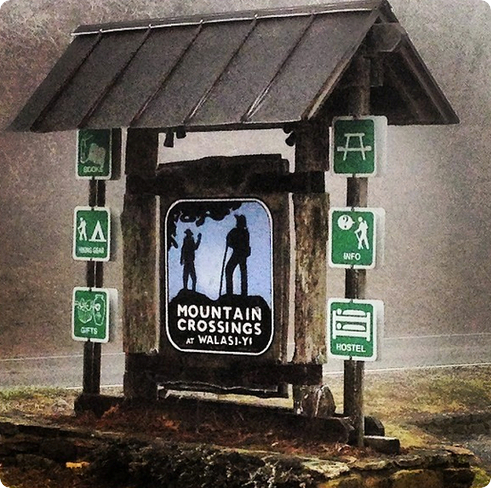 Not thirty miles North of the approach trail
where Neel’s Gap crosses the highway, you see a hostel

where failure and victory dangle in the branches of a single tree.
The owner says Southbounders just completing the trail,

Northbounders who finish months later,
or quitters who just up and decide they’d had enough

still return to sign their trail names in the sole’s heel.
Then the wind-up, and Foom! they sling their busted sneakers,

broke-strapped sandals, and treadworn boots like bolas
which catch and twine a branch as if saying Yes I was here.

You’ve seen it before, straddling telephone lines,
just out of reach, but it didn’t mean the same thing.

Here, hanging among the leaves, laces and aglets
like stringers of bluegill. Couched in yokes where two branches meet,

though Tommy uses lower case with the little t’s
four right angles, a dead-ringer for its mate.

Joined always in pairs, you think of lovelocks you first saw
on a bridge in Italy with the woman you love now

who you believe loves you. Together, you bought one—
a brass Master lock, and rolled the shank over the tumblers,

and then tossed the key off the foot trail in La Spezia.
You think also of the lyric Should I stay or should I go

and the promise made between two people like animated canines
having a Disney moment over a single pasta dish.

Victory, or defeat. Nothing is sure but two loops,
two bends tightened in linguini. How we have at least

this knot of time saying, Yes, we were here.

It’s a solitary process, and the user prefers using alone. Adrenalin
and oxygen mixed in the correct ratios. The runner’s high scored
by sprinting always over, or around his solitude until the body
throbs its pleasure-rattle, releases its cortisol, and self-medicates.
This is his real sweet tooth: Hurtling always towards something
he mistakes for bliss, twenty miles just to say he championed Unicoi
and Standing Indian Mountain in a single day. Afraid any slowing
in pace is the same as standing still, he keeps moving as if inertia
itself evades the question which skims just beneath the surface.
Whatever he says is true, if only because saying makes it so.
Am I worth stopping for? The truth, much worse than he feared.
Endorphins, serotonin, and enriched atmospheres—even these drugs
are numbing agents against what it is to be vulnerable. The Crayola
forest green of the trees blurring by him resonates to the cusp where
lime hues meet alpine when he blows through his second wind.
He may think it is the effect of atmosphere at increasing elevation
which lightens each stairstep to Nirvana, and not a firework’s
pulled string bursting into sparks on his eyelids’ back as he touches
himself again, and won’t let anyone or anything touch him.

JONATHAN TRAVELSTEAD served in the Air Force National Guard for six years as a firefighter and currently works as a full-time firefighter for the city of Murphysboro. Having finished his MFA at Southern Illinois University of Carbondale, he now works on an old dirt-bike he hopes will one day get him to the salt flats of Bolivia. He has published work in The Iowa Review on Poetrydaily.com, among others, and his first collection, How We Bury Our Dead, will be published by Cobalt/Thumbnail Press in February 2015. ◊