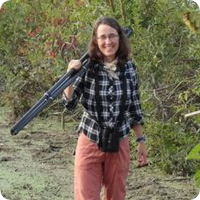 In “Canvasback” (Issue 5), by Susan Fox Rogers, you’ll meet a woman whose passion for birding helps her escape a midlife crisis. In the following interview, Rogers discusses birding, nonfiction writers, and her motto.

Susan Fox Rogers is the author of My Reach: A Hudson River Memoir, which chronicles her adventures, large and small, in a kayak on the Hudson. She has edited twelve anthologies relating to place, adventure, and the natural world including Solo: On her own Adventure, and Two in the Wild. In 2004, she travelled to Antarctica on a National Science Foundation grant and produced Antarctica: Life on the Ice. Since 2001, she has taught writing at Bard College. In addition to the birds, Rogers has found that a nice house on a hill in the Hudson Valley with views of the Catskill Mountains helps ease the midlife crisis.

What inspired you to create this piece? I read Howell Raines’ Fly Fishing through a Mid-life Crisis, which is really about fly-fishing and somewhere in there he has a midlife crisis, which means he gets divorced. It was a book I stumbled on at a used bookstore and right away enjoyed the voice, and the world he introduced me to. I started to create analogies with birding. And my own mid-life crisis.

How would you characterize your creative process as you worked on this piece? Patchwork. I begin writing my story. Then I start to research. And that research is often filled with luck or twists I could never anticipate (like Wilson’s Canvasback poem). Then it takes forever to make a whole out of all of the many parts because those parts are very sloppy. I feel like I use different grades of sandpaper, beginning with the rough stuff and working down, polishing, polishing.

What writing or other artistic expression has had a profound impact on your writing? Why? Painting. Jeff, a close friend in college was/is a painter. He worked fast, and shared his work right away with great joy. I work slowly and take forever to share my work with even my cats. He also used to burn his paintings, which I found terrifying. So I try to become more like Jeff, just writing and sharing it, like sharing a good meal. And then letting go of certain pieces, burning them.

Where do you create? Tell us about your workspace. In winter sitting next to the wood stove. In summer in the sun room. I need a lot of light coming into a room to feel settled.

I never work in my study. I pay bills there.

What do you do to help yourself get over a creative block? I think of writing as a physical endeavor. Some days I don’t want to swim either. But I go to the pool and maybe I won’t swim as far if I am not inspired but I’ll still do some laps. Many days I don’t want to write. But I sit down and even if I write blah blah blah for half an hour, well, that’s writing. Sort of. And then, eventually I’m back to something worthwhile. But I have to be at it every day or I lose words, ideas, the thread, the reason.

What living writer would you recommend other nonfiction writers read? What titles in particular? Why?  Some of my favorites: Gretel Ehrlich, who is fearless in life and on the page. She inhabits landscapes that I am drawn to: Wyoming, Greenland. I keep her Solace of Open Spaces nearby always. JoAnn Beard, who is a master of the essay and always surprises me. Donna Steiner who writes the most intimate, seductive essays.

Is there anything else you’d like to share with us about this piece, in particular, or about your creative process, in general? This piece is part of a longer work I am calling Learning the Birds. I started birding in 2010 and my passion took off. The book chronicles my first two years of birding intensively from Arizona to Alaska. I’m enjoying my research, especially of early women birders like Olive Thorne Miller or Miriam Florence Bailey. They were real characters.

Can you explain your research process in more detail? I begin with the bird–something I’ve seen in the field. And then I start to read. The easy material to find is scientific (Bird of North America Online is very helpful), and then I begin to leave it to chance. I recently read the biography of James Watson, the Nobel-prize winning scientist–not a place you’d expect to find information on birds. But it turns out he was a birder and through him I got to know more about the Kirtland’s Warbler. This is the part of research that I enjoy.

We asked Susan to dip into the “Proust Questionnaire” and select a few fun (less writing-related) questions to answer. This probing set of questions originated as a 19th-century parlor game popularized by contemporaries of Marcel Proust, the French essayist and novelist, who believed that an individual’s answers reveal his or her true nature.

If you were to die and come back as a person or a thing, what would it be? A Rusty Blackbird. It’s a rare-ish bird, but not one anyone pays much attention to—just a black bird with a white iris. But they get to live in boreal swamps in the summer (think remote Canada) and in winter I would get to live in the south where it is warm.

When and where were you happiest? In Antarctica. I was there in the winter of 2004-5 on an NSF grant. Specifically skiing back to McMurdo from Willy Field. Second: summer of 1981 that I spent rock climbing in Tuolomne Meadows. In other words I am happy when I am active outdoors in big, beautiful places.

Which words or phrases do you most overuse? Weep. Unbelievable. Let’s go. Right? I swear a lot, but I won’t write those words here.

What is your greatest extravagance? My binoculars. They cost $2,300.

Which talent would you most like to have? The ability to sing.

Who is your hero of fiction? Pip from Great Expectations. Or maybe really he is the first character I fell in love with.

What is your motto? Il faut tenter de vivre. It was my mother’s motto and comes from the French poet Paul Valery. It’s almost impossible to translate into English: You must strive to live comes close.

Can you elaborate a little more on your motto, if possible? Could you explain what it means to you specifically? For me, the quote means that you cannot live passively. You have to take life on, embrace life, push into it. There’s no drifting in “il faut tenter de vivre.”