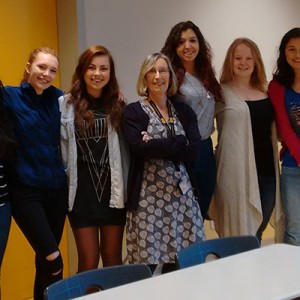 In “Summer of ’76” (Issue 1), an unprecedented heat wave laid siege on England and writer Heather Gatley spent her mornings working at a “plant breeding station”. In the interview following, Gatley explores nostalgia, traveling, and teaching.

Based in Eindhoven, The Netherlands, Heather Gatley has been writing about her experiences for family and friends all her life. This is her first attempt to go public. She holds a Bachelor of Arts in English from Aberystwyth University, Wales, and has taught all over the world since training in London 35 years ago. Gatley still likes the idea of the countryside and growing things, but seems to be allergic to weeding.

What inspired you to create this piece? Nostalgia. I had been on a trip to Hong Kong. I hadn’t visited Asia since living in Singapore as a child. Somehow, the whole experience shook loose a lot of memories of the places I had lived in my life. Some of the memories were suddenly so real that small details came back, such as what I was reading at the time, along with that special kind of longing that is painful and sweet.

How would you characterize your creative process as you worked on this piece? (ex: fast and furious, slow brew, fits and starts) I write whole pieces in one sitting, in the way I wrote essays at school: no planning, intuitively knowing I would reach a meaningful conclusion that would reveal something I had not thought about before, a discovery, perhaps, some new light maybe being cast on something. Then I go back and revise, although not as much as I ought to. The Proximity editors helped a lot.

What writing or other artistic expression has had a profound impact on your writing? Why? I am a life-long fan of Joseph Conrad. I love all of his works, especially the short early piece, “Youth”, which I read just about every year when I go on holiday! His experiences in the Far East speak to me, and the writing always lifts my voice a little too. He is very funny, which most people just don’t seem to notice. I love “Heart of Darkness”, even though Chinua Achebe’s essay against it was entirely convincing. There is something romantic and rich about the tales told by Conrad’s alter ego Marlow. I studied, “Under Western Eyes” and “Nostromo” in depth and the philosophical nature of the writing always fascinates me.

Where do you create? Tell us about your workspace. On a bus, on a train, in the car, on a beach; anywhere that I suddenly feel the need to write something down, a poem or reflection. This often means I use a scrap of paper, maybe a random notebook, lately the note-maker on my iPad. If I am organized, I may transfer this to a collection of files on the computer. I am not an organized writer. I tell myself I should collate my letters which lie in the loft and mine them for ideas. The loft is a fearsome place for our family though. No one likes to go up and look at their past lives: the photographs, the books and papers. It is too sad. We were such a close and dependent unit that when my two children left home, all of us felt bereft, knowing we couldn’t go back to living as a family. So we leave it all up there for later. When I was young I went to live in Peru for 3 years. Then I wrote many letters, and some recipients kept them and returned them to me. So I have a collection of thoughts in letter form, and I am still a letter writer, mainly email, to a couple of friends who like to write at length.

Who has been influential in your writing/creative work? Why? I have a good friend with whom I used to work in Berne when I lived in Switzerland. We taught English together and invited poets such as Adrian Mitchell and Benjamin Zephaniah, Roger McGough and Ian McMillan to visit our students. They all came. It was an inspiring time, for the children and for ourselves as literature teachers. When my friend moved back to America and I moved to Germany, we kept in touch. She lives in Connecticut and has that New England belief in the creative spark and its need to be nurtured. She has always encouraged me in my poetry and writing, even though I have the British tendency away from self-belief. When I visited Connecticut, I could see that the outlet for writing and music, the creative process, was huge compared to anything one might encounter in Britain, where a person is still very much restricted by their class. We took a tour of literary houses in Connecticut and I plan to return and continue soon, if possible. I still haven’t been to Salem, and am about to teach “The Crucible”, so this will galvanize me into returning, I think.

What do you do to help yourself get over a creative block? Keep travelling. Return regularly to Wales, my grandmother’s house, which is now my home, although I still live and work on the continent. The village I feel I belong to is certainly part of the inspiration for Dylan Thomas’s “Under Milkwood” and from the upper window of the cottage, I can see across the estuary to Laugharne, where he is buried. It is a beautiful, unchanging place, and just thinking about it can inspire me. Teaching has also been helpful, sometimes. Occasionally you meet an incredibly bright spark who wants to run a creative writing group. Just being on the sidelines, listening to these young people bounce ideas off each other is an inspiring thing. I am very lucky to be in contact with such souls.

You mention visiting various places and growing up in Singapore. How does traveling as much as you do, and the different places you visit, influence your writing? Briefly, travel is the most important stimulus for my writing, more often, poetry. I like to visit places great authors or poets have lived in. I always take their works with me or read them beforehand. For example, I am visiting Cape Cod this summer and have not been in the States for 9 years, so I reread Huckleberry Finn and Moby Dick. In Europe, I love to visit Greece and have developed many lessons on the classics for my advanced students.

How has teaching influenced your writing? What do you believe is the most rewarding part about being a writer who had a chance to teach?  You speak of me as a writer who has had the chance to teach. I am a teacher who has had the chance to write. I am retiring from teaching after 36 years. Only time will tell if I continue writing and travelling. I have been working in very pleasant International schools, hence, the chance to write. No one can teach in heavy State systems and actually write too, there is just no time for one’s own creativity. See D H Lawrence, Last Lesson of the Afternoon, and Philip Pullman and William Golding wrote, after they had given up teaching.

We asked Heather to dip into the “Proust Questionnaire” and select a few fun (less writing-related) questions to answer. This probing set of questions originated as a 19th-century parlor game popularized by contemporaries of Marcel Proust, the French essayist and novelist, who believed that an individual’s answers reveal his or her true nature.

When and where were you happiest? When I finally got my first teaching job, I lived in Surrey, which, for me, is the most civilized of counties in Britain. I could take the train to London and go to the National Theatre every week. I lived in a garret in the top of a half-tiled classic red house with a beautiful garden. I used to long to own such a house, but even now, it would still be way out of my reach. On winter evenings, I would look out of the leaded window at the silhouettes of trees against the low sun of winter and dream of exotic climes. Eventually I flew off, and have lived all over the world, restlessly travelling and teaching; but, sometimes, as the Brahmen said in “A Passage to India”, I think, it makes no difference really. It is all the same. I was probably happier in my first teaching job than I have been in any other since, and I was young and carefree and had a lot of friends who seemed to quite like me. That has not always been the case since, as I became the Headmaster’s wife.

What is your greatest extravagance? We have a Nestle coffee machine, and I seem to be purchasing more and more capsules each time I go to get a top-up. It is a sort of luxury. However, probably keeping the house in Wales free of tenants and just letting family and friends stay there for free whilst we pay for oil and electricity and the council tax is a bit extravagant of us.

Which talent would you most like to have? I wish I’d continued ballet lessons, which I started at the age of 5 and decided not to pursue as I would rather watch “Huckleberry Hound” on TV. When I started Pilates a couple of year’s ago, I realized I was in terrible shape compared to the teacher, who is a dancer. I reflected then that maybe I ought to have taken more care of this. Also, I am a shy sort of person who is rather inhibited. I think now, it must be amazing to be a dancer.

What is your current state of mind? Anxious. Sad. Morose. All for no particular reason, except that for me, April is usually the cruellest month. My mother died then, and spring comes, but I feel trapped in my job here at times. However, this year, we have an Easter holiday, so soon I hope this feeling goes away, although I seem to always be catastrophizing about old age these days, and worried about what I am going to do next, even though I should just settle down and enjoy what I have got here in the Netherlands, which is really very comfortable indeed.

What is your motto? Hmm. Perhaps I should get one.

This interview was curated by Devon Halliday, Proximity‘s Interview Series Coordinator and a Comparative Literature student at Brown University.