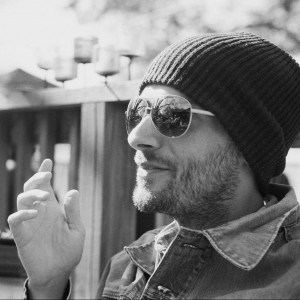 In “Flea Market” (Issue 3), S.R. Aichinger recounts a Nebraska flea market, a set of Nancy Drew novels, and the end of a relationship.  In the following interview, Aichinger discusses and slam poetry, authors to whom he is drawn, and rattlesnakes.

Living in Omaha, Nebraska, S.R. Aichinger holds an MA in English from the University of Nebraska–Omaha, where he was a 2012 Presidential Graduate Fellow. He is continuing his graduate work in Creighton University’s MFA Creative Writing Program. His creative nonfiction focuses on ways of remembering as a mode of embodied composition. He is a contributing writer at Hear Nebraska, a nonprofit organization dedicated to Nebraska’s local music scene.

How would you characterize your creative process as you worked on this piece? With the exception of edits and aesthetic tweaks from workshop feedback, I wrote “Flea Market” in one sitting. But this included a long writing block because I didn’t have a plan for the piece. Instead, I let the piece grow organically, following a path of details and associations as I recalled them. I was listening to a lot of slam poetry around that time, so I found myself writing with my ears. Pacing was crucial, as were exaggerated rhythms.

Where do you create? Tell us about your workspace. I can write almost anywhere—except at home. I need the world happening around me in order to write. At home I can only revise and edit.

What living writer would you recommend other nonfiction writers read?  Joan Didion, Annie Dillard, and Eula Biss are the three living writers who have had the most profound impact on me. Everyone must read the entire Didion catalogue—every word is perfect. Dillard’s work is perhaps less accessible, but I recommend two in particular: Pilgrim at Tinker Creek and For the Time Being.

We asked S.R. to dip into the “Proust Questionnaire” and select a few fun (less writing-related) questions to answer. This probing set of questions originated as a 19th-century parlor game popularized by contemporaries of Marcel Proust, the French essayist and novelist, who believed that an individual’s answers reveal his or her true nature.

If you were to die and come back as a person or a thing, who or what would it be? I’d like to come back as a fragrant water lily (N. odorata). They are exquisite and a source of food for many animals, including beavers and ducks.

When and where were you happiest? I lay in bed with a rattlesnake. His name was Jordan. It was around Halloween 2013, and between us we built a nest of candy.

What is your motto? “I do my best, but I’m made of mistakes.” Neko Case sang this in “I’m an Animal,” on her 2009 album, Middle Cyclone. I have it tattooed along my left bicep. On my darker days, I’m drawn to this line from Tori Amos’s song “Spark,” on her 1998 album, from the choirgirl hotel: “If the divine master plan is perfection, maybe next I’ll give Judas a try.”

This interview was curated by Devon Halliday, Proximity‘s Interview Series Coordinator and a Comparative Literature student at Brown University.