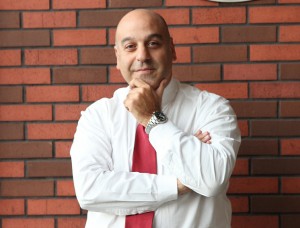 Armenian coffee, the complex character of his mother, and a range of tables are featured in Shahé Mankerian’s brief collection of “Table Poems” (Issue 6). In the following interview, Mankerian discusses his mother’s recitation and repertoire of poems, writing before sunrise on Sundays, and typewriters.

Shahé Mankerian’s recent manuscript, History of Forgetfulness, has been a finalist within four prestigious competitions: the 2013 Crab Orchard Series in Poetry Open Competition, the Bibby First Book Competition, the Quercus Review Press, the Fall Poetry Book Award, and the White Pine Press Poetry Prize. Shahé serves as the principal of St. Gregory Hovsepian School in Pasadena and the co-director of the Los Angeles Writing Project. As an educator, he has been honored with the Los Angeles Music Center’s BRAVO Award, which recognizes teachers for innovation and excellence in arts education.

What inspired you to create these pieces? Now that my mother has slid into the early stages of dementia, I have become more intrigued by her routines, patterns and rituals. One such routine has become her fixation with coffee drinking. If she was a coffee lover before dementia, now it’s one of her means of survival. When she gets thirsty, she drinks coffee. When she needs companionships, she lures neighbors and friends with coffee. In the process, drinking Armenian coffee with Mother has established its own unusual routines, patterns and rituals. For example, when Mother had guests, she always offered to read the coffee residue inside their cups. She was an amateur fortuneteller. Now, with her dementia, her imagination has gone wild. She repeats, recreates, readjusts stories because she forgets her initial predictions.

How would you characterize your creative process as you worked on this piece? I write every Sunday morning before sunrise. However, I prewrite poems in bed between my dream state and wakefulness. Then, as the coffee percolates, I start my journey directly on the word processor. I try to write at least 100 words each Sunday.

What writing or other artistic expression has had a profound impact on your writing? As I child, my formative years, I am assuming the most profound impact has come from Armenian poets and playwrights. Moreover, Mother always recited poetry as I grew up. Another fixation that has accelerated with the demise of dementia. Growing up, she had a repertoire of poems in her subconscious that she reverted to whenever we had gatherings. As a young man, I also enjoyed the melodrama of the Armenian theatre; it was overacted, colorful, and impressionistic. I enjoyed watching the theatre explode with laugher and lapse into uncontrollable tears all within the same scene.

Where do you create? Tell us about your workspace. I create at the dining table, where the colors of the cinematic dawn permeates through humongous stretch of windows.

Who has been influential in your writing/creative work? William Saroyan, Charles Bukowski, Antoine de Saint-Exupéry, both my parents, and a number of Armenian poets and playwrights, not necessarily in this order.

What do you do to help yourself get over a creative block? I write through my creative blocks. I write pages of crap, and then I start editing and rewriting. Suddenly, working through the crap becomes scraps of wondrous ideas.

What living writer would you recommend other writers to read? Anything by Naomi Shihab Nye, Nancy Agabian’s Me as Her Again, Elif Shafak’s The Bastard of Istanbul, Arthur Nersesian’s Chinese Takeout… Why? Because these writers have the same immigrant dilemmas as I do.

Is there anything else you’d like to share with us about this piece, in particular, or about your creative process, in general? Read Bukowski’s poems “so you want to be a writer” regularly. It will put a lot of literary aspirations into perspective.

Can you explain why you write every Sunday morning before sunrise and where this tradition came from? I belong to a group of blog writers that take turn by writing on a particular day of the week. The blog (https://onehundredpluswords.wordpress.com) compels us to write at least 100 words.

We asked Shahe to dip into the “Proust Questionnaire” and select a few fun (less writing-related) questions to answer. This probing set of questions originated as a 19th-century parlor game popularized by contemporaries of Marcel Proust, the French essayist and novelist, who believed that an individual’s answers reveal his or her true nature.

If you were to die and come back as a person or a thing, what would it be? A typewriter with black and red ribbon.

When and where were you happiest? Sunday mornings before dawn.

Which words or phrases do you most overuse? Coffee and shoes.

What is your greatest extravagance? Coffee and shoes.

Which talent would you most like to have? To be an operatic singer.

Who is your hero of fiction? The lamplighter in The Little Prince.

What is your current state of mind? Tired but happy.

“A typewriter with black and red ribbon” is a pretty specific answer to what you would want to come back as in another life. Can you explain further? In part, I became a writer because I was so fascinated by this magical machine. I remember requesting from my father to purchase me a typewriter because I told him, I wanted to become a writer. Although he was constantly struggling to make ends meet, he never refused my request. I was 13.