Penny Guisinger on “Batboy is Disappointed” 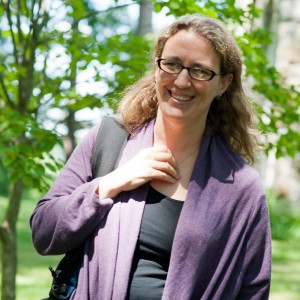 Batboy loses a mitten, but mom gains an important lesson about life and the way we live it, in “Batboy is Disappointed” (Issue 3). In the following interview, Guisinger discusses her creative process, the idea of creative block, and her happiest moment.

Penny Guisinger lives and writes on the easternmost tip of the United States. Her work has appeared or is forthcoming in Fourth Genre, River Teeth, Solstice Literary Magazine, Under the Gum Tree, and others. Her work is also forthcoming in two anthologies, due out in 2015. She is the founding organizer of Iota: The Conference of Short Prose. She is a Libra (sun sign in Aries) and an ENFP.

What inspired you to create this piece? It was really my son, who was about five at the time, making these demands. As a writer, I’m always looking for the wider-angled view – what else is going on right now? I really did move the couch, looking for that glove or that belt. I really worked hard to make him happy. A lot of my work is also about being a divorced parent, and how crazy making it can feel. So that experience is in this piece too. This intrepid, hardworking narrator is trying so hard, but is also aware how fleeting it is. That’s parenting. It’s also life.

How would you characterize your creative process as you worked on this piece? (ex: fast and furious, slow brew, fits and starts). This piece has been revised slowly, over and over, for at least a year. This is how it always works for me. I write the first draft, then put it away for as long as I can. When I get my eyes back on it, I can sometimes see what’s missing or what the piece really wants to be, and revise toward that idea. Usually, that’s not right either, so I put it away again. It’s very hard to know when it’s done. Sometimes I think I could do that forever – sort of an infinite revising machine.

Where do you create? Tell us about your workspace. I have a beautiful place set up to write in my house. I have this huge, heavy oak desk, and it sits right in front of a huge window that overlooks a field of hay. Beyond that, there’s a pine forest on one side, and the ocean on the other. However, I actually do most of my writing in this ugly recliner in the living room with my back to the window. I have no idea why this is.

What do you do to help yourself get over a creative block? I don’t believe in blocks. I think the way through is to keep writing even if it sucks. Keep writing even if there’s nothing good happening on the page and it makes you feel like hell. I really believe it’s the only way through those harder times. Do I practice that? No. Almost never. But when that happens, I blame it on my own lack of discipline, and not writer’s block.

What do you think the difference is between your “own lack of discipline” and writers block? I think many people would argue that they could be considered interchangeable. To me, the term “writer’s block” is used in sort of a blanket way to describe an experience in which a writer cannot bring him/herself to write. There are people (smart people – lots of them) who will disagree with me, but I have always felt like writer’s block isn’t real. I’m not saying that there aren’t thousands of things that – in real life – keep us from putting words on the page, but calling it “writer’s block” attributes the problem to some external thing that we “catch” like a cold. In my experience, the only way around anything that we might call a “block” is to write. The things that stop us are things like insecurity, perfectionism,  life’s other priorities stepping in front, or feeling lost in a project – the only way to get past any of those things is to write. Sometimes that means lowering our own standards for ourselves. Sometimes that means giving ourselves permission to write badly for a few days or weeks. Sometimes it means saying “no” to someone or something else to create the time. (For me, it generally means setting my alarm clock for some painfully early hour so I can get it done while everyone else is still asleep.) Sometimes it means backing up and trying a new approach or starting a new project. We can’t always write well, and we can’t always make progress toward a particular goal, but we can always write.

We asked Penny to dip into the “Proust Questionnaire” and select a few fun (less writing-related) questions to answer. This probing set of questions originated as a 19th-century parlor game popularized by contemporaries of Marcel Proust, the French essayist and novelist, who believed that an individual’s answers reveal his or her true nature.

If you were to die and come back as a person or a thing, who or what would it be? There are lots of people I think are really interesting, but I can’t imagine that I would want to actually be any of them. If I could choose anything, it might be a seagull. I live on the ocean, and I spend a lot of time watching the gulls riding air currents, soaring over the surface of the water. It seems like a nice gig. (But I might like to be a seagull that befriends some nice people and gets to come inside in the winter. Is that an option?)

When and where were you happiest? The closest I have come to bliss is when I was a little girl with her own pony. I used to lie on her back in the sun while she grazed. With my eyes closed, I just listened to her incredible teeth ripping and grinding up grass, and felt her huge muscles shift beneath me. Her fur was so warm and ponies have the most distinct, memorable, wonderful smell. When I got tired of that, I used to braid daisies into her mane. Seriously. It was ridiculously sweet.

Which words or phrases do you most overuse? When I revise, I have to go on a “just” hunt, because that word creeps onto just about every page of every first draft! Also other minimizers like “a little” and “only.” It’s a way that I back into a statement – like I’m sneaking up on the verb. Weeding those things out is always one of my first tasks in revision. It’s about fear of being bold, I think. I don’t know if that ever goes away.

Why do you think you don’t actually want to be (die and come back as) any of the people you find interesting?  This is an interesting question! I can admit that I have a hard time coming up with a good answer because it’s not possible for me to die and come back as any of the gathousands of other people I find fascinating. But if that possibility became available, I might feel to afraid to give it a try. It’s sort of like I think I might like to drive around in a Lamborghini for a couple of weeks, but I would probably miss my Honda. It’s comfortable. I know the trick that it takes to open the door. I know that there’s one rear caliper that sticks sometimes, but not when my mechanic is looking. It’s not fancy, but I know its quirks. I think of myself like that: not perfect, and not without a bunch of quirks, but I’m familiar ground for myself. Also – if I were driving a Lamborghini – I would feel a lot of pressure not to leave my dirty travel mugs on the floor and not to let my kids get crumbs in the back seat. If I died and came back as Ta-Nehisi Coates, for example, I’m not sure I’m up for the job! I’m not sure I’m the person to maintain all that brilliance. I am probably better trusted with my quirky Honda version of a mind than someone else’s sports car mind.