My best friend when I was younger used to cry at sappy movies: The Lion King, Clueless, For Love of the Game. One weekend, her dad took her to see Dances with Wolves. He thought it would be nice. Thought it would give them some time together, just the two of them. But it wasn’t nice. The wolf died at the end and my friend left the theater in tears.

A year later, the same friend shot her first deer – a little forkhorn. Her dad built her blind, taught her how to sight her rifle, told her to exhale as she pulled the trigger. He guided her deep into the woods in the crackling black of pre-dawn and captured on film her proud smile next to the hapless forkhorn after her bullet found a home in it later that afternoon.

I asked her how she does it, this girl who sobs over dead movie dogs. 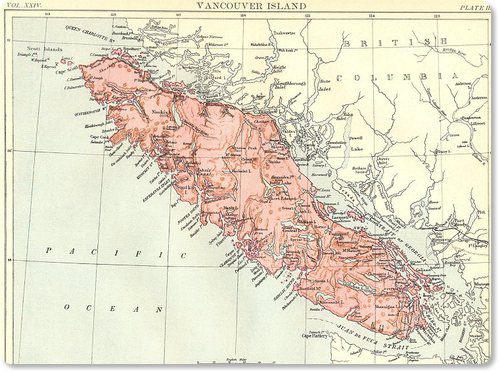 Over the edge of the rowboat I’m in, off the shore of Vancouver Island, I can see a flat-as-a-pancake fish nestling in close to my lure. I jig the pole, keeping the bait just out of its reach.

My boyfriend notices that I am actively not fishing. Un-fishing, if you will. He asks me, What do you think you’re doing?

I don’t want that one, I tell him.

Why not? he asks.

It’s a bottom feeder, I tell him. I’m not going to hook it and throw it back just to say I got a fish.

It’s a flounder, Erin, he says. It’s not a bottom feeder. You’ve heard of flounder, haven’t you?

I had heard of flounder. I’d even eaten flounder. I just don’t want to catch a fish, I tell him.

At all? he asks, gesturing to the giant salmon that keep leaping out of the water all around us.

I nod, then shrug. I want badly to fit into his life here, to be the kind of girl who will head out with him on the Strait of Georgia in the rowboat his dad built, for a morning or even a whole day. An Island girl, like his ex-girlfriend—the one he slept with just before I arrived. The one we avoid talking about. But right now, my want to not have that fish on my lure is stronger than the urge to equal her. To best her.

I ask him to imagine being pulled up into a boat, the full weight of your body hanging from a sharp hook lodged in your lips or your gums. What that must feel like – the gasping for breath and the slowly suffocating. And I don’t want to do that. To anything.

But fish have itty-bitty brains, he says. Almost no nerve endings. They barely feel a thing.

Something bites on his line and our conversation pauses as he reels it in. I peer over the side where a jet-black fish that looks more like a small shark is thrashing, suspended in air. It looks like nothing we could eat. And I’m right. In the next moment, my boyfriend grabs a heavy metal hook the length of his forearm and runs it into the fish before pulling up. The air hums with the ripping of the flesh, like a damp paper bag.

Fucking dogfish, he says. The fish stops thrashing. It’s limp at the end of the line. He reaches down, frees the hook, and tosses the dogfish, like a baseball, out into the ocean.

We like playing cards together – poker, especially. But he always wins. And this is why: in my eyes, on my face, in that moment, he sees how I see him. He shakes his head, slowly, back and forth, wondering, I’m sure, how he could have misjudged me so badly, too.

What can I say? I’d like to tell him. I’m the daughter of a man who brings books to deer camp, and forgets his gun. 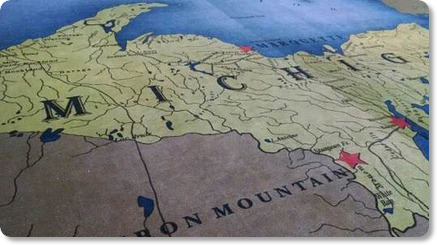 Driving north on M-95, toward Marquette, at the uppermost edge of Michigan’s Upper Peninsula, I end up behind a rusty old Ford, maroon and white, pulling an equally rickety-looking trailer. The Ford creeps along, but I can’t pass in the face of a long thread of cars heading in the opposite direction. So I settle in, adjust the cruise, and scan for a decent song on the only two stations available in the radio’s sea of static. I can’t help but study the trailer attached to the Ford ahead of me. On it is a four-wheeler and a blue tarp. Cloven-hoofed, spindly legs stick out from under the tarp. Four of them, rigid.

Growing up in Michigan’s Upper Peninsula, you got used to this sort of thing – dead, frozen deer strapped to car roofs, hanging from trees or swing sets. Hot venison seared in an ice shack over a crude stovetop and parceled out like candy, by the boy who shot it back in November, complete with details on the hunt, designed to impress the girls in attendance. If you were lucky, the story was short. If he used a gun, it usually was. But a bow story could drag on and on, the deer staggering, wounded, through the late fall mix of leaves and snow as you rolled its sweet, gamey meat around in your mouth, trying to choke it down.

Then, miles down the highway, the wind whips just right. The tarp flaps back.

I hear my friend’s voice: Don’t look at the eyes.

I concentrate on two little nubs the size of a man’s thumb, on top of its head, and will the tarp to lay back down. But then my gaze slips. The eyes are soft and black. A surprised, pleading look frozen in them, the same as the day, the moment before, it was shot.

I like doing intervals on the treadmill at the gym. Somehow, the clock’s steady countdown, the ticking off of miles in increments of tenths, makes it all more bearable. Unlike doing speedwork out on the road, it’s a controlled environment, a known universe.

I am on my last 800 repeat when I glance up, only for a moment, and see a falling cow broadcast in surround-sight on every television.

The video is grainy, as if filmed in secret, and shows a cow being forced with an electric prod onto a semi-truck. But the cow stumbles. It walks forward on its knees, nose troweling through the muck. It gets up, stumbles, and knee-walks some more. Over and over again. Finally, it simply collapses, one wild eye, straining, it seems, to look directly at the camera.
The video ends.

I punch at the stop button on the treadmill. I feel sick.

It’s just a cow, I tell myself. You eat cows, remember?

But that night, I quit. I clean out my freezer, tossing all the meat in it, even though I’m fully aware that it’s already dead.

That summer, I try out the raw lifestyle. I buy a dehydrator and gourmet cookbooks for “cooking” raw meals. I am constantly hungry, though I lie and tell people – especially my husband – otherwise.

The car in front of us slows and swerves. From under its wheel a chipmunk emerges, twitching and spinning in the middle of the road. I tell my husband to pull over, to turn around.

But my husband is not from where I’m from. He’s used to a contained sort of nature – zoos, conservancies with planked walkways, National Geographic on TV. He’s never had to smell the singed fur of a deer or scrape its intestines off his car after hitting one, fallen asleep to the mournful howl of coyotes, or come face-to-face with one on his way to do morning barn chores. He hasn’t killed anything bigger than a fly. I have a horse, two dogs, and three deer in my column.

He knows what I am asking. He says no.

I am quiet on the remaining quarter mile drive to my parents’ house. I think only of that chipmunk, twitching back there on the hot, hot pavement.

At my parents’ house, my husband shifts to park, and I ask him to leave the car running. He goes inside. I climb into the driver’s seat. On the return trip, I brace myself for the sound – the crunch to come – beneath the tires.

It takes me mere minutes to find the chipmunk, and by the time I do, it is still. I park the car on the road’s shoulder and walk to the yellow center line. I bend down and press a finger to its tiny ribcage, feeling for the slightest rise and fall. Nothing. I scoop up the little body and carry it to the shade where I lay it in a bed of grass. I stare into the one inky eye that seems to be trained on me.

I don’t look away.

ERIN CELELLO lives in Madison, Wisconsin, with her husband and two young sons, but she will forever be a Yooper at heart. She holds a MFA in fiction from Northern Michigan University and is the author of two novels: Miracle Beach and Learning to Stay, which was nominated for a PEN/Faulkner award for fiction. Her nonfiction has appeared in Zocalo Public Square. In the hours not spent toddler-wrangling or writing, she teaches at the University of Wisconsin-Whitewater.